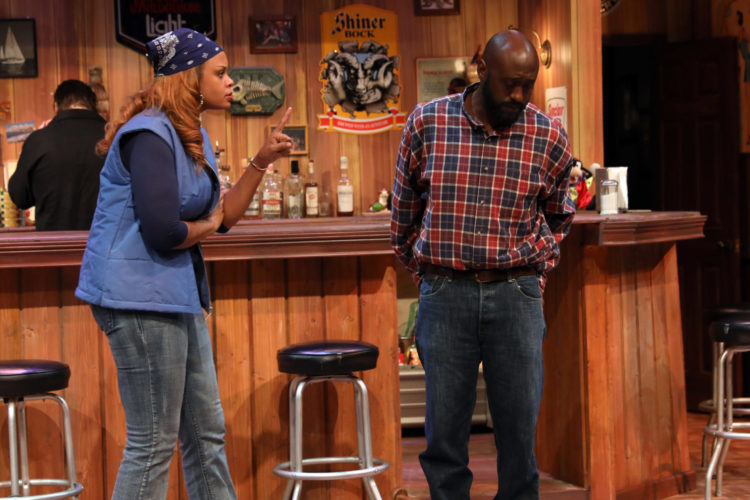 By Jason JohnsonOctober 17, 2018No Comments

This article was originally published by Carolina Curtain Call on October 16, 2018.

“Sweat” gets to the raw, exposed core and painful rationale behind the Rust Belt Trump voter and examines the loss of the American Dream in a naturalistic story with gritty emotion and the crushed value of human worth.

“The Rocky Horror Show” was a huge hit again for The Warehouse Theatre this Indian summer.  But that silly, escapist tale was just musical fodder and filler as the company revved up for its official 45th season hard-hitting opener, “Sweat” by Lynn Nottage.

Nottage, whose “Intimate Apparel” was produced at Centre Stage last year, won the 2017 Pulitzer Prize for Drama with this grim, daunting drama, about blue-collar American, and ultimately, the Trump voter. Nottage is also the first African American female playwright to win two Pulitzers.

Just as Barbara Ehrenreich’s “Nickel and Dimed’ (book and later play) demonstrated the impossible task of poor Americans trying to survive on the minimum wage, “Sweat” painfully depicts the dissolution of  the American Dream in America’s manufacturing industry.

Reading, Pennsylvania in the Rust Belt is home to Olstead’s steel-tubing plant that is the livelihood of generation after generation of employees who have earned a robust Union paycheck until the hard realities of a global economy devastate this town and its denizens, as the U.S. manufacturing sector shrivels and American jobs are shipped to Mexico.

The play, directed by Martin Damien Wilkins, is primarily set at the local watering hole where factory workers come to unwind, throwback a few drinks, celebrate birthdays and gripe about the state of their union at Olstead’s.

Read more of this review from Sandy Staggs and Carolina Curtain Call HERE.