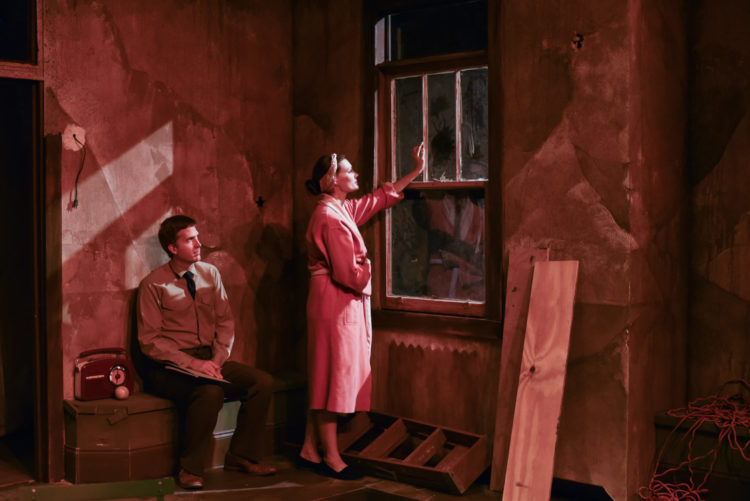 By Jason JohnsonSeptember 29, 2017No Comments

This article was originally printed on September 29th, 2017 by the Greenville News.

Warehouse Theatre’s latest production, “Clybourne Park,” is an award-winning play by Bruce Norris that tackles a timely issue in Greenville: economic development and the gentrification that can result.

For this week’s On Stage With Donna Walker, Warehouse Theatre’s producing artistic director Mike Sablone and actress Miranda Barnett talked to The Greenville News about the play and how it connects to Greenville’s own renaissance.

The interview has been edited for length and clarity.

Q. Mike, why did you decide to open the season with this particular play?

Sablone: When I first came to Greenville, I asked the staff, because I was new here, what are the main issues or concerns that the residents of Greenville have? Because I wanted to be representing those issues and concerns on stage. And they mentioned gentrification, and upon moving here, I noticed that gentrification and the amount of growth that had happened in this city for the last X amount of years was exponential. And we are lucky enough to have a Pulitzer Prize-winning play, a Tony Award-winning play that deals with gentrification. And so it was a real easy decision for me to make, to make this the first play of the season.

Q. How does the action in the play dovetail with what’s happening in Greenville?

Sablone: It takes place in 1959 and 2009. It’s sort of a prequel and a sequel to “Raisin in the Sun,” which you don’t need to know, but it’s awesome if you do. But in 1959, a white family is selling their house, they did not know, to a black family, the first black family to move into the neighborhood. And then you jump forward 50 years during intermission to 2009, and in that (era), the house has seen better days. And a young, upwardly mobile white couple is going to try to buy the house to raze it. And so it is sort of about the passage of time. Both acts, you end up having the same conversation, in 1959 and 2009, so it feels like it’s always happening right now, and it feels very relevant in 2017 Greenville.

Q. Miranda, what’s your role in the play?

Barnett: I play two different characters. In the first act, I play a woman named Bev who is struggling to move forward with her husband after a tragedy. Their house is the house which is being purchased. … In the second act, I play a real estate agent helping to, not only broker the deal, but assist through some of the questions that arise as the same home is now being sold again. It’s going to be rebuilt. … And so dealing with the historic questions and how the history is being honored.

Sablone: The great thing about the play is that everyone in Act One gets to come back as a different character in Act Two, sometimes on different sides of the arguments they’ve been having.

Read more of this article from Donna Walker of the Greenville News HERE.