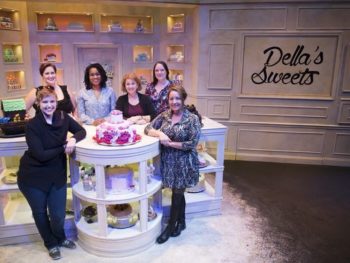 This article was originally printed on December 7th, 2017 by the Greenville News.

From the artfully designed cakes to the dainty bedside lamps to the poignant speech that bakery owner Della gives to her husband about love, the drama’s female point of view is evident.

That’s no accident. “The Cake” is being staged with an all-female production team, a first for Warehouse Theatre. That means that everyone from the director to the stage manager to the prop designer is a woman.

Director Kerrie Seymour is a veteran of many Warehouse Theatre productions, both onstage and behind the scenes. She said it was a new experience to work on an exclusively female crew.

“I think a lot of times when I’m in a room, I hesitate to raise my hand and speak up sometimes, and a lot of times it’s men who speak first,” Seymour said. “And this is the first process that I’ve been in that there is no choice but to have a woman speak first.”

“The Cake” tells the story of a baker in North Carolina who’s asked to make a cake for the same-sex wedding of her best friend’s daughter. It was written by Bekah Brunstetter, who also serves as a producer on the hit TV show “This is Us.” Warehouse is the third theater to stage the new play.

And “The Cake” is an especially prescient production, in light of the case of a baker refusing to create a wedding cake for a same-sex couple, a case that went before the Supreme Court this week.

The idea to present a female-centric play with an all-woman crew came from producing artistic director Mike Sablone.

“For me, representation matters,” Sablone said.

When Sablone begins planning a season, his goal is to have 50 percent female playwrights and directors, plus an ethnically diverse company of performers and crew.

And “The Cake,” he said, was a natural fit for an all-female team.

“I thought the alchemy of the room would be improved, the more women we could have involved, both onstage and off,” said Sablone, who came to Warehouse earlier this year.

Several of the women on the crew have worked together in the past, and three of them teach at Clemson.

For lighting and sound designer Maranda DeBusk, it was a refreshing change to work with other women on a production.

Because so few women work in her field, DeBusk has sometimes felt that she needed to prove herself to her fellow crew members.

But this time, “No one ever questioned that I knew what I was doing,” DeBusk said.

The team began actively working on “The Cake” a few weeks before the play opened on Dec. 1, but the planning has been going on for months.

Seymour created a Pinterest board where the production team could share ideas for the look of the show.

Scene designer Shannon Robert used that Pinterest page as a “springboard for starting a conversation. Working directly with the lighting designer, lights are a very important part of the physical space itself. … Without giving the story away, until a particular thing happens that changes her, that gives her a 180 and wakes her up in a way, she doesn’t leave this world, and so the bakery, the set, kind of morphs into other locations,” Robert said.

Robert had to take into account the seating configuration of the theater… Read more of this article from Donna Walker of the Greenville News HERE.