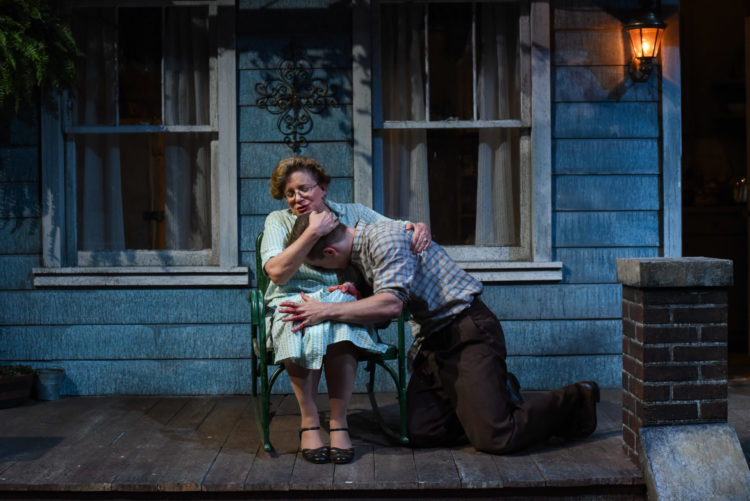 REVIEW: ALL MY SONS by Fete Magazine

By Jason JohnsonApril 11, 2017No Comments

When The Warehouse Theatre announced ALL MY SONS on its 2017 calendar – along with the marquee players in it, along with its celebrated playwright – any review could automatically write itself. Because Mimi Wyche, Chip Egan, Arthur Miller.

Nothing more would need to be said about this production of the 1947 play from one of America’s most esteemed, most intense writers; Miller, almost as famous for his marriage to Marilyn Monroe, also fathered Rebecca Miller, whose husband, Daniel Day Lewis, is arguably the finest actor around — unless you’re talking specifically about Greenville, in which case we’re back to Egan and Wyche.

Now add to that list of enormous local talent Torsten Johnson. Here, the young Equity thespian plays son Chris, opposite Egan’s father, Joe Keller. Torsten pulls off nothing short of magic portraying a fresh-from-World War II vet torn to pieces as he learns his father’s horrifying secret: Joe had blamed a supervisor in his factory, an unseen Steve, for shipping out cracked cylinders used in warplanes, resulting in the deaths of 21 pilots. Joe went to jail for a bit, but Steve landed in the pen for 17 years. Joe, meanwhile, found himself locked in his own figurative prison of guilt and lies.

Egan’s Joe explodes off the stage. He starts off lighthearted, easygoing, even generous. Then he dissolves into fear, anger, and destruction. That’s hard work, but Egan makes it look easy, which is what makes him so good.  (Perhaps what helps here, too, is that Egan and Wyche dominated WHO’S AFRAID OF VIRGINIA WOOLF?, their last outing together at WHT).

Now to Wyche. Greenville’s stage icon owns the maternal role of Kate with agonizing perfection.  Trapped alongside her 61-year-old husband, Kate refuses to let go of the non-alternative fact that their son, Larry, died during the very war whence Chris had just returned. Kate believes with obsessive denial that Larry will waltz back any minute. Wyche deftly pulls you into Kate’s own jail of crazy, which has also kept her locked away from all the family’s suppressed truths.

The script comprises 10 characters, including young Bert, played by Shaw Shurley, an urchin who can’t be much older than 12. Bert appears briefly and only twice, but he serves as something of an oracle in Miller’s Greek tragedy. Shurley’s WHT debut deserves a shout-out for playing his few minutes with such promising aplomb.