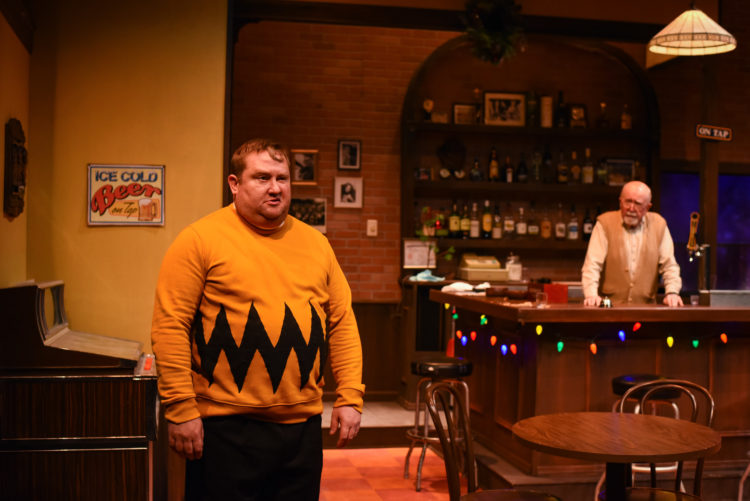 REVIEW: Christmas on the Rocks Brings Grown Up Laughs to Warehouse

By Jason JohnsonDecember 13, 2018No Comments

This review was originally published by Broadway World on December 8, 2018.

“Seriously, Christmas is not what it used to be.”

Late night, Christmas Eve, an aging, empty bar tended by an aging, amiable bartender. He brings in a solitary decoration – a leg lamp, like the one that was the “major award” won by Ralphie’s dad in A Christmas Story. He lights it up and stands behind the bar, waiting to see if he gets any customers.

And in walks Ralphie. Not 9 year old Ralphie from the movie. No, this is Ralph, now grown up and feeling a bit of a failure. He’s unemployed, his wife has left him, and he’s still dealing with the aftermath of that bunny suit he got for Christmas so many years ago. So he unloads his burdens on the friendly barkeep, as one does. And maybe, just maybe, when he’s done telling his story, he’ll feel just a little bit better about himself before he leaves the bar.

That’s the set up for Christmas on the Rocks, a series of vignettes, each written by a different playwright, that give us grown up versions of memorable Christmas characters, including Ralphie, Charlie Brown, and Tiny Tim. These folks are now bitter and troubled, their famous Christmas adventures having negatively shaped their lives. As you have no doubt gathered, these are very much adult-themed vignettes.The Warehouse Theatre’s new production stars Ronn Carroll as the bartender, a role he originated in the show’s 2013 premiere, with Brock Koonce, Matt Reece, Amanda Sox, and Anne Kelly Tromsness appearing as various familiar characters. Each of the actors created numerous memorable moments for me, including the very physical comedy of Amanda Sox, especially as she takes some very unusual drinks; Matt Reece’s attitude – and hair – as he plays a certain elf; the hilarious commitment – and perfect hair choices – that Anne Kelly Tromsness brings to both of her vignettes; Ronn Carroll’s wistful patience with each of his bar’s visitors; and, most of all, the sweetness underlying Brock Koonce’s portrayal of everyone’s favorite loser, Charlie Brown.

Read more of this review from Neil Shurley HERE.