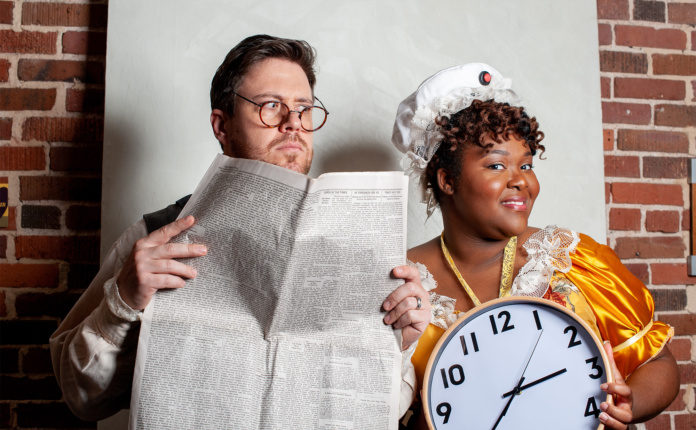 This preview was originally published by the Greenville Journal on May 29, 2019.

Jane Austen’s classic lovers — the strong-willed Elizabeth Bennet and the proud Mr. Darcy — stroll off the pages of “Pride and Prejudice” and onto the stage at The Warehouse Theatre.

“[She’s] just a little bit more of free spirit than perhaps other people of society of the day,” Sox says. “She is decidedly against marriage. She’s never going to get married.”

Two of Sox’s favorite scenes are proposals gone wrong. “You kind of get to see Elizabeth’s awkward turmoil manifested on stage in a very visually hilarious way,” she says.

While packed with fast-paced humor, heart, and costume changes, the play is surprisingly easy to follow, according to the cast.

“She is the matriarch of her family, and her duty is to get her daughters married at all costs, despite their objections — many objections,” Beverly says.

Although she enjoys playing matchmaker for her daughters, Mrs. Bennet has good intentions. “At the core of everything, I believe, for her is that her daughters’ futures are secured,” Beverly says.

Both die-hard Austen fans and Austen newbies can appreciate the heart and humor of the adaptation.

“The heart of the show is ever-present,” Beverly says. “I think it’s the through line. I think all Austen fans, ‘Pride and Prejudice’ fans, will still get that and won’t miss it at all.”

Director Jay Briggs ensured the main themes and characters permeate the roughly two-hour play. “What I think is great about this adaptation of the story is that it’s unabashedly a play,” he says.

Acknowledging that characters are actors performing for an audience, the “Pride and Prejudice” play radiates with theatrical energy.

“You’re sort of invited to come along and play the game with us,” Briggs says. “The fun of it is most of the cast play multiple characters, and the audience knows that and is in on the joke.”

The scenic design by Will Lowry also immerses the audience further into the experience. With the thrust stage, guests will truly feel as if they’re sitting in the drawing room/ballroom.

“We were also very taken thematically with the way in the novel a lot of the major revelations for the characters happen in exterior spaces, whether it’s the garden or at Pemberley outside,” Briggs says.

To honor those outdoor moments, Briggs and Lowry chose to have a big branch bursting into the room. The wallpaper also features outdoor elements to tie in Austen’s theme of social constraints on the wild, free spirit.

“It’s a really fun production of a really timeless story,” Briggs says. “You can hopefully walk away feeling that there’s something about love that defies the barriers that we put up against ourselves.”