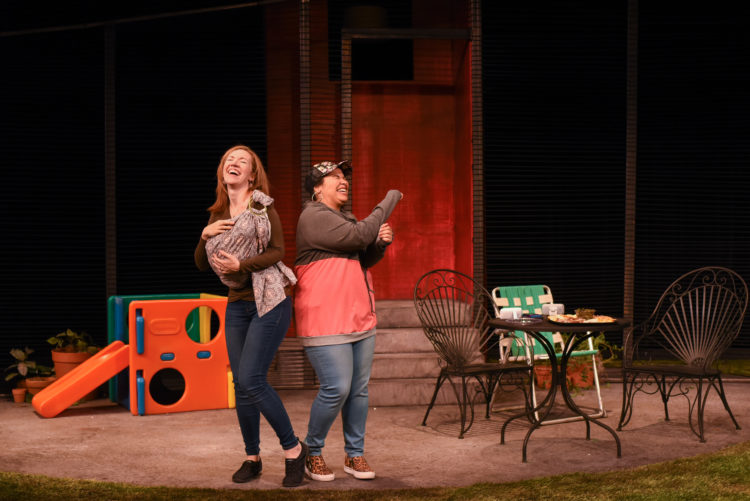 BWW REVIEW: CRY IT OUT at Warehouse Theatre is Funny, Relevant, and Real

This review written by Neil Shurley was originally published by Broadway World on April 30, 2019.

Yes, Cry It Out, which opened last weekend at the Warehouse Theatre, is a play about motherhood. But it is also about relationships and contemporary life and workplace dynamics and parenting in general. It is laugh out loud funny as well as relevant and devastatingly real and, quite honestly, I think you will have a fantastic time watching it whether you have children or not.

The show stars Amanda Sox as Jessie, a privileged, on-the-rise Manhattan lawyer who recently moved to the suburbs and had her first baby. She’s arranged to meet her neighbor, another new mother named Lina (Jessica Eckenrod), in the open area of their adjoining yards. Lina comes from a very different background – she works in hospital billing, lives with her boyfriend’s alcoholic mother, and has terrible credit – but she and Jessie end up bonding as they meet every day while their babies nap.

Their comfortable dynamic changes, however, when a strange man, Mitchell (Jason D. Johnson), arrives in the yard. Mitchell explains that he lives in the exclusive neighborhood up the hill and that his wife, Adrienne (Miranda Barnett), has been observing Jessie and Lina’s meetings via backyard telescope. Would they be willing to let Adrienne join their coffee klatch? What results is, as they say, the rest of the story.

And it’s a good story. Playwright Molly Smith Metzler crafts vivid characters and situations with dialogue that feels authentic while also managing to be just heightened enough to feel meaty. There are tons of ideas to unpack from this play, but it never feels like an “important” play about “issues.” It’s as fun as it is smart.

Director Rebekah Suellau keeps the show moving at just the right pace – it’s presented without intermission but I hardly noticed. I was sucked in the whole time, relishing the chance to learn more about these three women. And I loved the careful – but not overt – ways the staging mirrored the arc of the characters, from Jessie and Lina awkwardly trying to sit on an infant slide to some of the later moments when their doors seem somehow farther apart.

Amanda Sox is terrific as Jessie, the big city lawyer who struggles with the idea of staying at home versus returning to work. Sox is a joy to watch, especially her reactions. Jessica Eckenrod, too, is marvelous as Lina, for whom staying at home is simply not an option. The two characters could hardly be more different, but Sox and Eckenrod convincingly show us the way their friendship grows. And both of them are effortlessly funny. I will never forget the way Eckenrod passive-aggressively eats cheese.

The cheese in question is brought by outsider Adrienne, icily played by Miranda Barnett. Adrienne is from a whole different social stratum as Jessie and Lina – figuratively, geographically and physically. With her added to the mix, the tension and comedy quickly mount. Barnett brings her usual power and authority to the role and is especially good during a devastating monologue. That moment also served to focus the play’s larger questions for me, about the struggles women face as they juggle careers and perceptions and expectations and their own desires. Important questions with no easy answers.