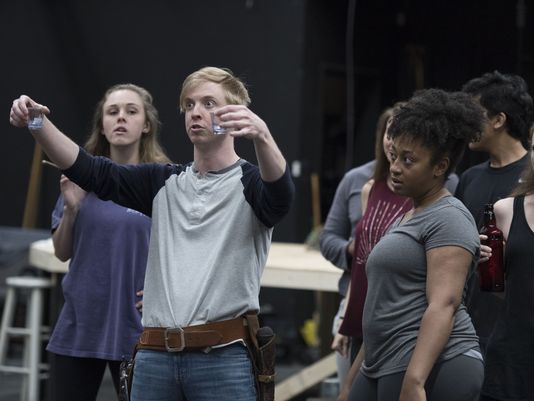 This article was originally published by The Greenville News on May 31, 2018.

Racial tensions, deep divisions between political parties, and a populist president who takes pride in his outsider cred — that sounds a lot like the political climate of 2018.

And a musical that casts unexpected actors as America’s Founding Fathers, performing tunes of the 21st century — that sounds a lot like “Hamilton.”

But the new show at Warehouse Theatre is neither set in current times nor inspired by Lin-Manuel Miranda’s blockbuster Broadway hit.

“Bloody Bloody Andrew Jackson,” which opens June 8, resonates in surprising ways in the America of 2018, even though it was written more than a decade ago and takes place in the 19th century.

In fact, just about the only person playing a character that shares their gender and ethnicity is Benjamin Taylor Davis, who plays Andrew Jackson as a petulant, emo-style teen rock star who enjoys the 19th-century practice of bloodletting.

Director Andrew Scoville, who was assistant director for the play’s Broadway run, wanted a cast that reflects America as a whole, which meant selecting the actors who best embodied the characters, whether or not the performers’ race or gender matched up with those of the characters.

“The decision to do it this way was just all about giving Americans ownership over an American story,” Scoville said before a rehearsal. “And I don’t consider America to be white, and so it was important to me that our cast not be all white. But beyond that, I didn’t have any particular breakdown in terms of look for any particular part. We just put together actors who had a sense of joy and comedic timing, and we placed them where we thought it would be most interesting in relation to the other actors we have as well.”

Read more of this article from The Greenville News and Donna Isbell Walker HERE.