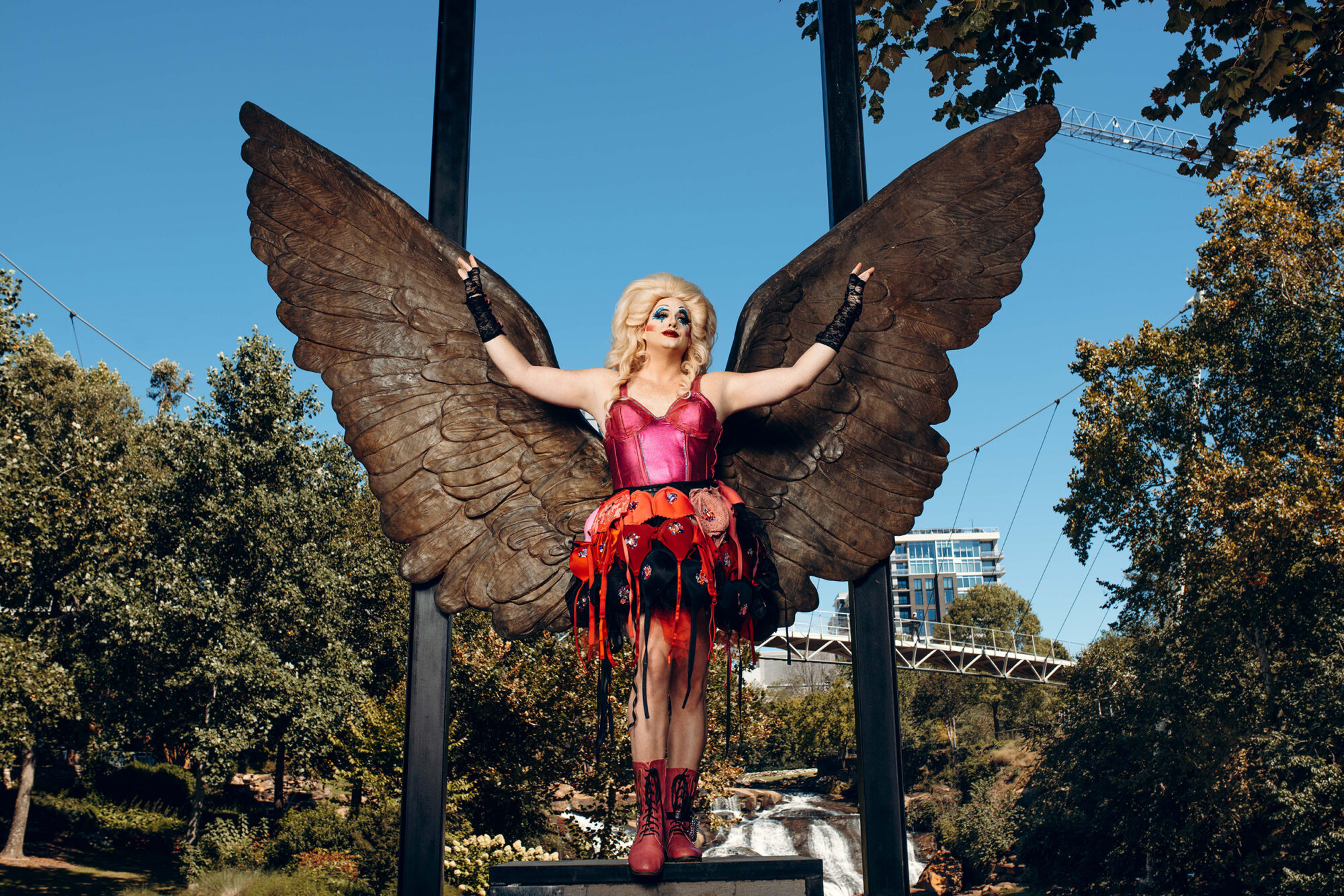 BWW Interview: Delighted Tobehere of HEDWIG AND THE ANGRY INCH at Warehouse Theatre

By Jason JohnsonSeptember 29, 2021No Comments

This Broadway World article by Neil Shurley was originally published on September 23, 2021.

On March 15, 2020, the pandemic brought Warehouse Theatre‘s dynamite production of HEDWIG AND THE ANGRY INCH to an abrupt – and early – halt.

This weekend Hedwig & co. return in all their rock & roll glory as The Warehouse launches their 2021-22 season.

Clay Smith, also know as drag queen Delighted Tobehere, returns as Hedwig, along with Miranda Barnett as Hedwig’s companion, Yitzhak. The musical itself centers around Hedwig, who recounts her past few months of hiding in the theatre and the heartbreak of remembering her long-lost love Tommy. Meanwhile, Yitzhak toils away on the sidelines, attempting to make his employer shine. The musical is “part cabaret, part stand-up comedy show, part rock concert, part drag performance, and all entertaining.”

We asked Clay to tell us about returning to this iconic role.

Tell us a little bit about March 2020 and how it felt to close the production so abruptly.

That fateful Sunday matinee is one I won’t soon forget. I think we all had some small suspicion that it could be our last show, and I know I left it all on the stage so I would have no regrets. With that being said, at the end of the show I made my exit and broke down into tears. To cheers and applause I returned to the stage for curtain call, a sobbing mess. It’s that juxtaposition of joy and sadness that has stuck with me. Rarely do we have clean lines of emotion or story line in our lives. It’s that mosaic that is celebrated in this show, so I found it almost magically appropriate.

How difficult was it – or, I don’t know, maybe it wasn’t difficult at all – to get back into Hedwig’s shoes? Did you have any hesitations about starting the production up again?

This was the easiest yes in history. Since the show ended Miranda and I have become close friends. A stark contrast to the first two weeks of rehearsal where I couldn’t look her in the eye. A consummate professional, she could tear up and stare into my soul without flinching, and since I primarily do one person shows, it took some time to become comfortable being that vulnerable. They say you don’t learn anything if you’re the biggest fish in the pond, well beside Miranda and Scoville I was a guppy in an ocean that proved to be a fantastic and safe classroom. Nobody in their right mind would pass up that opportunity again.

How has this year and a half gap impacted the way you play the role?

The premise of this show is that it takes place in the present time and place, which allows us to be honest in our experiences without dragging the audience back through everything that we’ve gone through. The pandemic is certainly addressed, but I feel in a beautiful way where there’s simply a kinship felt between the shared experiences of the players and the audience.

During the first run I lived in NYC and I was returning to my hometown to play this wild and provocative show – which was thrilling. But back in December I moved to Greenville – my own wicked little town – and have been faced with navigating the shadows of a closeted past as an adult gay male.

So, in that, and under the guidance of the inimitable Andrew Scoville, Quinn Xavier Hernandez, and beside Miranda Barnett, the band, and the incredible creative team at The Warehouse Theatre, this show takes on a new life which should not be missed.

What kind of changes did Covid protocols make on the rehearsal process and on performances?

I know I’m grateful to Actor’s Equity and The Warehouse Theatre for doing everything they can to bring back live theatre in an engaging and responsible way. We’re questioned by a designated safety monitor before every rehearsal and performance, temperature checked, and required to have the vaccine. This show is particularly lucky because there’s really only two people in the cast for rehearsals, and we just so happen to already be in each other’s bubble. So, sure, it was different, but everyone has done their part and believes in the importance of live theatre and taking care of each other and our community.

“Safety is our top priority at The Warehouse. Actor’s Equity Association has strict protocols that we have been following that have allowed us to have a safe rehearsal process, which is fantastic! We’re operating as a fully vaccinated company and combining that with masks and vaccine negative test requirements will make HEDWIG a safe environment for patrons and artists alike.

We’ve also done some upgrades on the building, including on our HVAC system circulating fresh air into the building, as well as utilizing Needlepoint Ionization filtration on the air.

Plus we are VERY excited to unveil our new bathrooms. We’ve upgraded to all touch free fixtures as well as increased ventilation in each stall.”

How has it felt to literally get the band back together?

I can’t say that there’s been zero trepidation. We all remember how it felt when the show closed in 2020, and none of us want to feel that TWICE! But, all in all, it’s simply a joy. There’s not a theatre creator in existence that hasn’t had the thought of “if I only had *one more week,*” well, we got two and a half. From tech to story this show is more polished and nuanced than ever and we are not only thrilled, but proud to share this story again…for the first time…through new lenses.

As the drag artist, Delighted Tobehere, I have 4 basic wishes for anyone in my audience… to live in the moment, live a better life, love yourself, and love each other. And though I’m the PG rated artist of the drag world, and Hedwig is DEFINITELY not that, lol, this show fulfills every single one of those principles that my career has been built on.

You can follow Delighted Tobehere on social media – @queendelighted on all platforms – and at www.imdelightedtobehere.com.

HEDWIG AND THE ANGRY INCH runs from September 24 – October 17, 2021 at the Warehouse Theatre in Greenville, SC.

Blue Star Theatre discounts for veterans and active military apply throughout the run. I Pay What I Can Sunday is September 26th at 3:00pm with tickets being sold on a first come, first serve basis starting at 2:15pm.