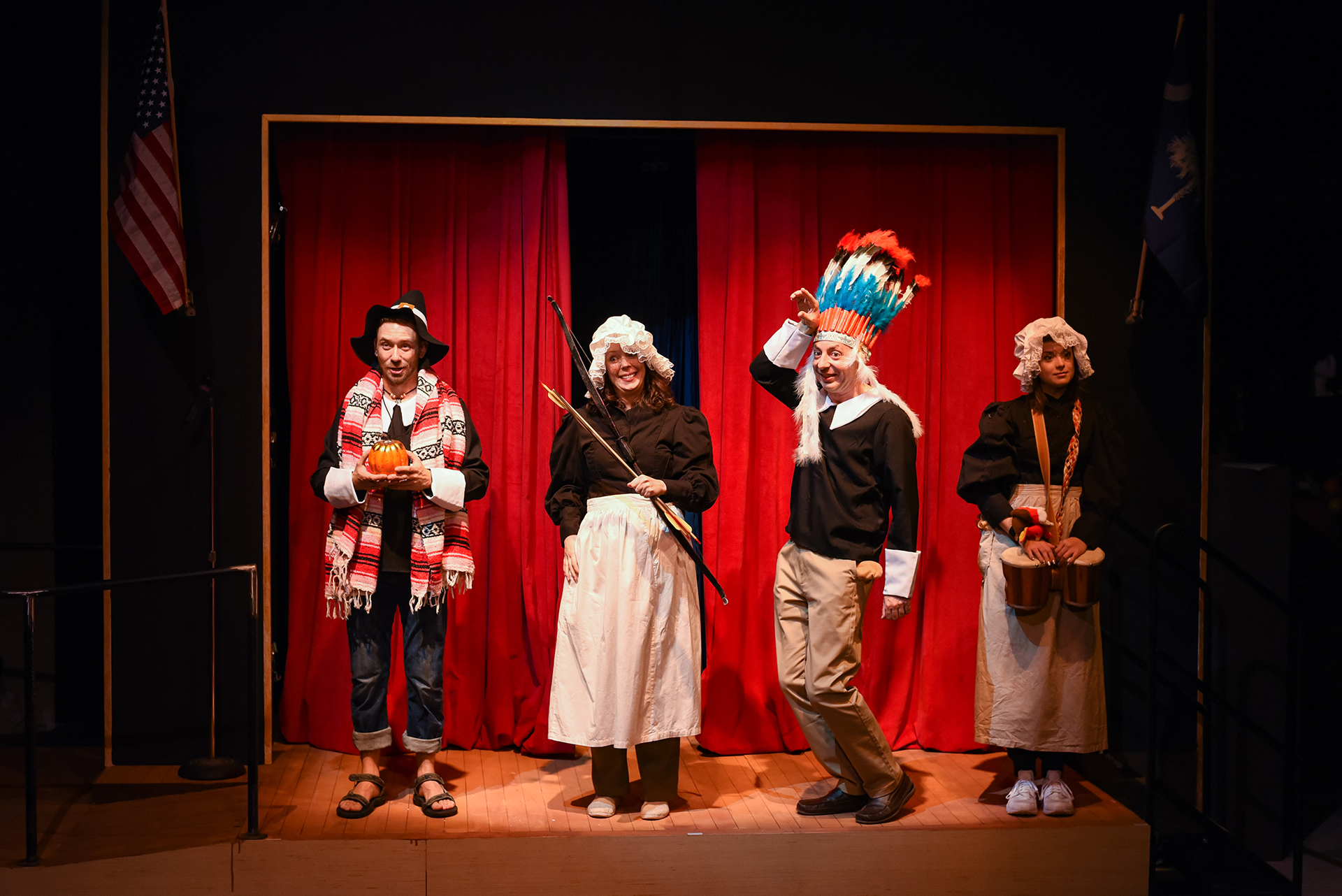 This review was written by Steve Wong and originally published by Carolina Curtain Call on November 14, 2019.

Just in time for Thanksgiving, The Warehouse Theatre in Greenvilleis presenting the nationally popular The Thanksgiving Play and dishing out some political incorrectness that is tasty but at times hard to swallow.

As we anticipate (or dread) the coming gathering of family and friends to give thanks and overeat, this quirky play serves as a mental appetizer to chew on before we have to face opposing ideologies over turkey (Butterball versus tofurkey), religion, and American heritage. But as these four woke characters demonstrate, finding the best way to produce a politically correct Thanksgiving play for elementary children can be an exhausting exercise in circular logic. Along the way, we get to laugh at the absurdity of trying to please everyone all the time, laugh at each other, and, hopefully, laugh at ourselves.

At the heart of this production we have Logan–played by Kelly Strandemo–a would-be and failed actress (oops, I mean actor) who has come home to teach public school drama. She’s vegan, white (yes, that matters), and hyper-aware about all things politically correct or not. She’s on the verge of losing her job for producing The Iceman Cometh, which some-300 petition-signing parents thought crossed the line. She is now tasked with producing a Thanksgiving play and adhering to grant guidelines that require her to “devise” a play that honors Native American Heritage Month.

Her No. 1 cohort (and secret lover) is Jaxton – played by Kyle Brumley – a flaky street performer, yoga teacher, and vegan ally. He’s woke, stylishly bearded, and white, too.

Adding more “creative input” into “the process” than is wanted is Caden – played by Matt Reece – a history teacher and closeted playwright. He’s white, geeky, and not very woke because this is his big chance to have his words spoken by real actors, albeit they will be third graders.

Finally, we have Alicia – played by Hannah Morris – a real actor, who is supposed to fit the bill for a required native American. Whatever! She’s an actor and can play any role that is needed – as long as she gets paid. She is white, but she could pass as an ethnic minority, given a burka, pigtails, or bronzing cream.

The missing and elusive key ingredient to devising this play — that should give voice to indigious people — is a real indigious perspective. But in the spirit of white wokeness, where there’s a will there’s a way, and throughout the play these four characters explore their options to fulfill grant and school requirements, be creative (but not too creative), be sensitive and responsive to trending social awareness, and not get run out of town.

What can they do and what they eventually do or don’t do are the question and answer we must explore in own lives to truly get what The Thanksgiving Play is all about.

Director Kerrie Seymour and this cast are exceptional in balancing the comedy with social messaging. The tension builds as hand-wringing Logan leads her cast down various paths of creative solutions, some of which get rather dark and frightfully weird. This leads to restrained conflicts and even sword fights with pink water noodles that morph into pretend penises. Despite the fun and frolic, the nagging question about being true to one’s self lingers. Probably the best insight and character development are presented when Logan questions Alicia’s ability to play a minority role. The answer is simple: She’s an actor with no agenda other than to get paid.

Written by native American Larissa FastHorse, The Thanksgiving Play is an off-Broadway comedy, promoted to be “one of the top ten most produced plays” in the country. It was originally written in 2015, and after receiving several readings and workshops around the country, it opened in New York City in 2018. At this time, it playing all over the nation.

As usual, The Warehouse Theatre is doing a bang-up job in producing a modern play with social impact and laughs aplenty. For anyone asking themselves, “How do I get through Thanksgiving dinner with narrow-minded Uncle Joe and thin-skinned Aunt Margaret?” this play just might offer an entertaining non-solution.