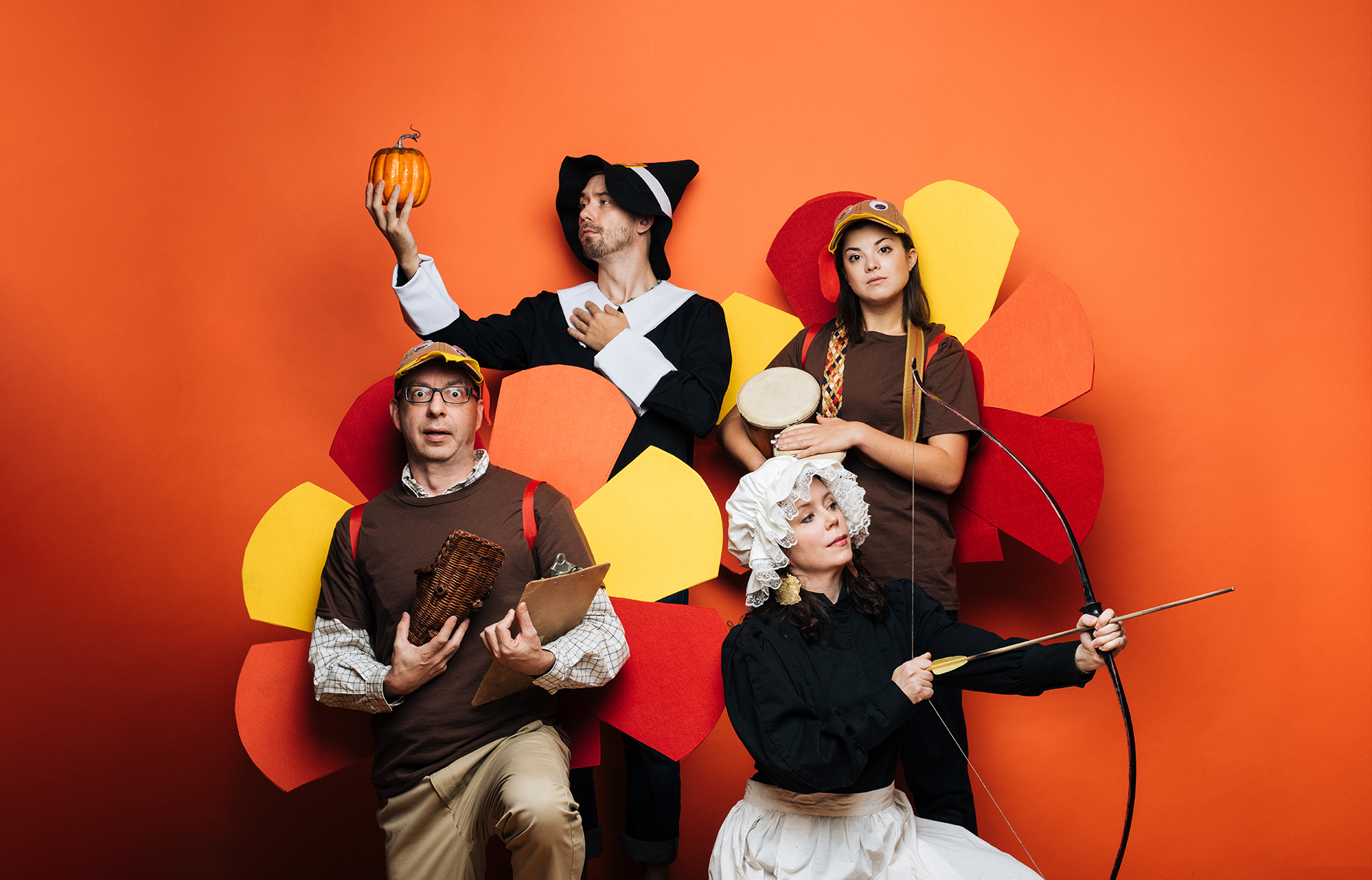 This review was written by Neil Shurley and originally published by Broadway World on November 10, 2019.

Sometimes a show wins you over the moment you walk in the door.

So it was with the Warehouse Theatre’s production of Larissa FastHorse’s THE THANKSGIVING PLAY. I got a huge smile on my face just walking into the space. Scenic Designer David Hartmann has stunningly recreated a high school drama classroom and stage. Just looking at the floor tiles (amazingly created by just paint, not actual tiles) caused flashbacks. The walls, the posters (you owe it to yourself to take a close look at the posters), the fire alarm – it’s all just perfect. I’m guessing that Props Designer Amanda Sox also deserves kudos for bringing the space to life.

However, all that is literally just backdrop. Fortunately, though, the rest of the show also kept me smiling.

The play is full of these kinds of hilarious phrases – as when Logan says she’s going to help Alicia the actress “recover from the false value placed on her sexuality” – and wonderful recurring moments – for instance, every single time Jaxton practices yoga. And along with the clever dialogue there are some wonderfully silly physical moments that will stick with me, especially a sort of juggling routine that defies description.

Much more than physical comedy or clever wordplay, though, THE THANKSGIVING PLAY takes aim at another type of juggling – that of educators and artists trying to strike a balance between meeting community and school district expectations versus fears of cultural appropriation, the whitewashing of history, and meeting the all-important terms of monetary grants demanding diversity. How do we continue to respect and share our foundational stories without going to extremes? Can we still talk about Pilgrims and Indians without depicting massacres and exploitation? It might be that the answer Logan comes up with at the end of THE THANKSGIVING PLAY is exactly where we’re headed as a culture. Let’s talk about it after you’ve seen the play.

Director Kerrie Seymour takes a heightened approach to the material, keeping the characters at their extreme edges as they navigate the minefields of political correctness and over-sensitivity. For me, the characters felt like they were dialed up a little too much, where it might have been more effective if they came off as closer to that feeling the set gave me – grounded in reality but with a just a touch of comic accentuation.

But even at that higher comic setting, the cast comes off well. Kelly Strandemo brings a nice exasperation to Logan, the teacher trying to dig her career out of a hole even as she tries to wrangle her three collaborators. Kyle Brumley is terrifically “woke” as teaching artist Jaxton. Some of the show’s funniest moments come from those two characters as they become hyper-aware of the “process,” making everything just that much more difficult. They also work well against – and with – Matt Reece’s high-strung, star-struck Caden, the history teacher who wants to start the Thanksgiving play with a scene set 4,000 years ago. And Hannah Morris is just right as Alicia, the vacuous, ethnically-flexible young actress who is utterly uninterested in art or telling a story – she just wants to get paid.

There were a few sections of the play that fell a little flat, and the interstitial pieces confused me at first. Turns out they are recreations of actual Thanksgiving content available to teachers. But that wasn’t clear to me at first. It may be that because the characters are all played with ratcheted intensity, their cartoonishness wasn’t differentiated enough from the over-the-top Thanksgiving pageant recreations. It will likely help if you go in knowing that these “skits” break up the actual scenes of the teaching artists in action.

But even as it was, I laughed a lot. Maybe it’s the fact that I have worked as a theatre teaching artist that made it resonate even more with me. But judging from the laughter around me, I wasn’t the only one who found this play to be a Thanksgiving treat.