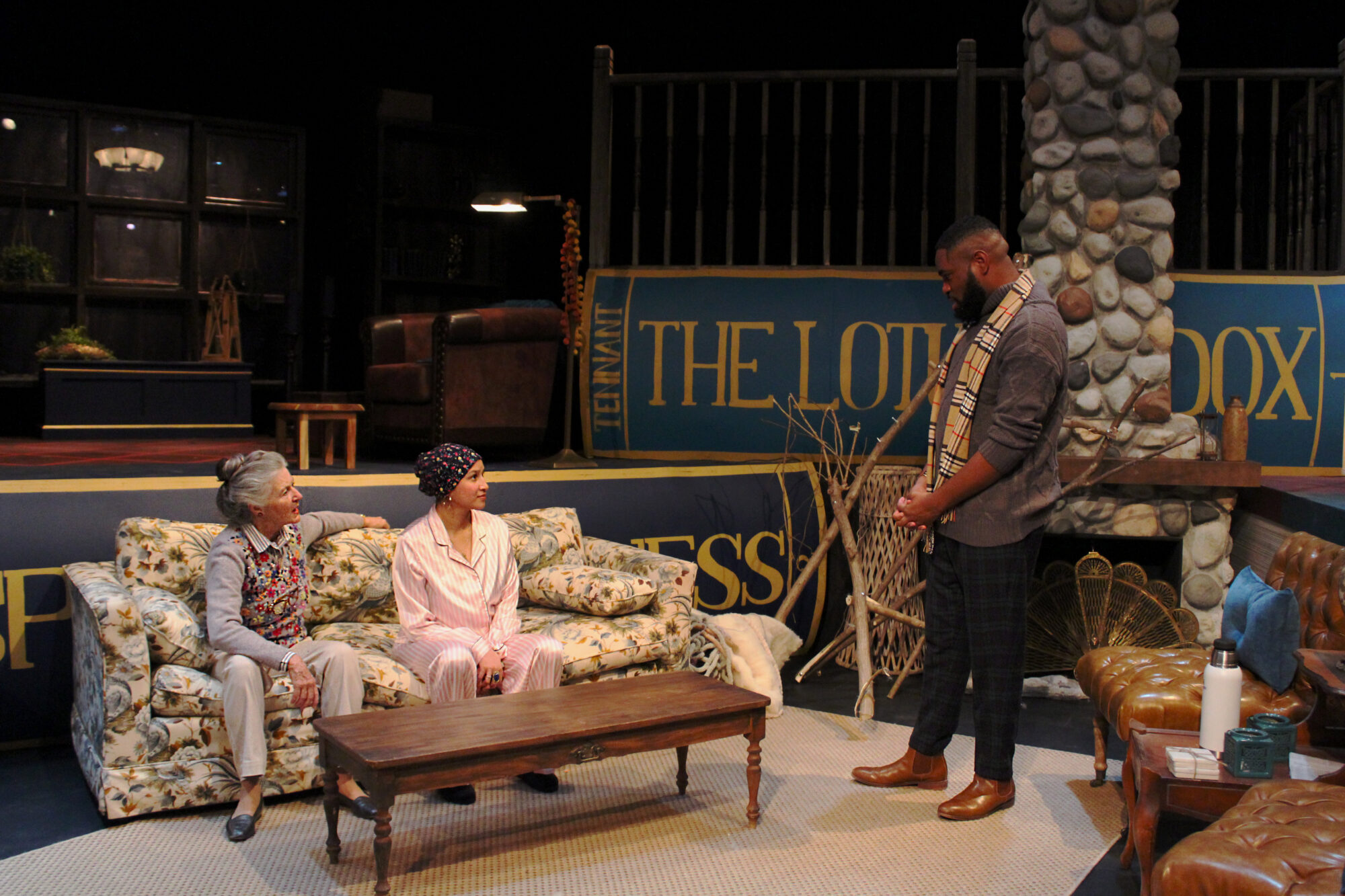 By Jason JohnsonJanuary 26, 2022No Comments

This review from Neil Shurley was originally published in Broadway World on January 24th, 2022.  (Photo: B Strife)

‘You exhibit,’ the old man continued, ‘The Lotus Paradox. Despite living nearly submerged by water, the lotus repels water from its leaves. That’s how it stays dry.’

What would it be like to grow up as the son and daughter of a legendary author? What happens when a foundational children’s book trilogy is the literal foundation of your entire life? And when your mother, the author, has based her main character on one sibling while seemingly ignoring the other, can you ever find peace?

Those are the raw underpinnings of Dorothy Fortenberry’s THE LOTUS PARADOX, a comic drama now making its world premiere at Greenville, SC’s Warehouse Theatre. Touching on toxic family dynamics, global warming, personal/professional legacies, fan culture, and the writing process itself, the play weaves all that and more into a layered and entertaining story about the stories we tell ourselves.

Rebecca Koon stars as Nora, the author in question, whose Lotus Paradox trilogy is now 25 years old. Her young editor, Garrett (DeBryant Johnson), has just arrived at Nora’s house to help celebrate the anniversary. Also on hand are Nora’s two adult children, Hal (Jason D. Johnson) and Dealie (Amanda Sox), who have chosen to honor this 25th anniversary in their own ways. Dealie brought Nora a homemade fiber-art sculpture constructed of twigs and yarn and certain found objects from around the house. Hal created a thermos of Irish coffee. For himself. Without using any coffee.

Into this nest of personalities comes Julia (Dayanari Umana), a 17 year old superfan who arrives, wet and uninvited, at their door. Julia is a social media power user with just one wish – to meet and spend time with her favorite author.

As the evening proceeds, tempers flare, choices are questioned, secrets are revealed, and hot cocoa is consumed. And some – maybe even all five – of these people get to understand each other just a little bit better. Then again, as Hal reminds us early on, geniuses are kind of dumb.

Fortenberry’s script feels exceedingly well timed, part of an ongoing cultural conversation with other recent works that explore the creative process and whether writers have responsibilities to the real people that inspire their stories – from John Boyne’s Ladder to the Sky and Jean Hanff Korelitz’s bestseller The Plot to Robert Kolker’s viral NYTimes Magazine article about the Bad Art Friend and the Cat Person controversy. But along with that, THE LOTUS PARADOX encompasses politics (“Did your podcast save America?”) and aging (“Confusion is the secret weapon of women over sixty”) and the current state of fandom (“hashtag NoraTennantFanclub”).

Then there are the mental health aspects of the show. Issues of identity. Trust. Belonging. Putting self above family. And if this all sounds like too much to cram into one play, don’t worry, because it’s not. Fortenberry skillfully brings it all together into a funny and moving look at the sometimes tortured way people choose to interact with each other.

Director Jay Briggs keeps the character relationships In Focus, using the levels in Kristina White’s set to wonderful effect. This is a family split into three parts, just like the three levels of the set, each one reflecting a book of the trilogy. It’s a brilliant set design which truly needs to be seen to be fully appreciated.

As Nora, the matriarch, Rebecca Koon is quiet (sometimes too quiet) and cagey. You’re never quite sure if Nora is all there, how much of her cold, detached presence is age and how much is calculation. And Koon always delivers the laughs on understated lines like “I had to choose between being nice and being alive. I went with alive.”

Jason D. Johnson’s Hal is a seething ball of resentment, unleashed numerous times over the course of the proceedings. Balancing that is Amanda Sox as the soft and dutiful Dealie. Together, they really carry the emotional weight of the show. As for the two strangers in the midst, DeBryant Johnson brings a sly earnestness to the role of Garrett, Nora’s rep at the publishing house. And Dayanari Umana erupts onto the scene with perfect juvenile enthusiasm, later demonstrating her own caginess as her internal motivations shift and evolve.

The show runs a little under two hours, without intermission. But I, for one, never needed a break. Caught into this labyrinth of characters, I found myself always eager to know where the play was going next, wanting to see if my suspicions were correct. And wondering if this family would ever come to peace.

On opening night, Warehouse Theatre Producing Artistic Director Mike Sablone delivered an emotional curtain speech, acknowledging the cast and crew, the difficult circumstances around the production of the play, and the happy coincidence of snow flurries occurring outside at the very moment he was speaking. It was a beautiful way to bring this brand-new play to life.