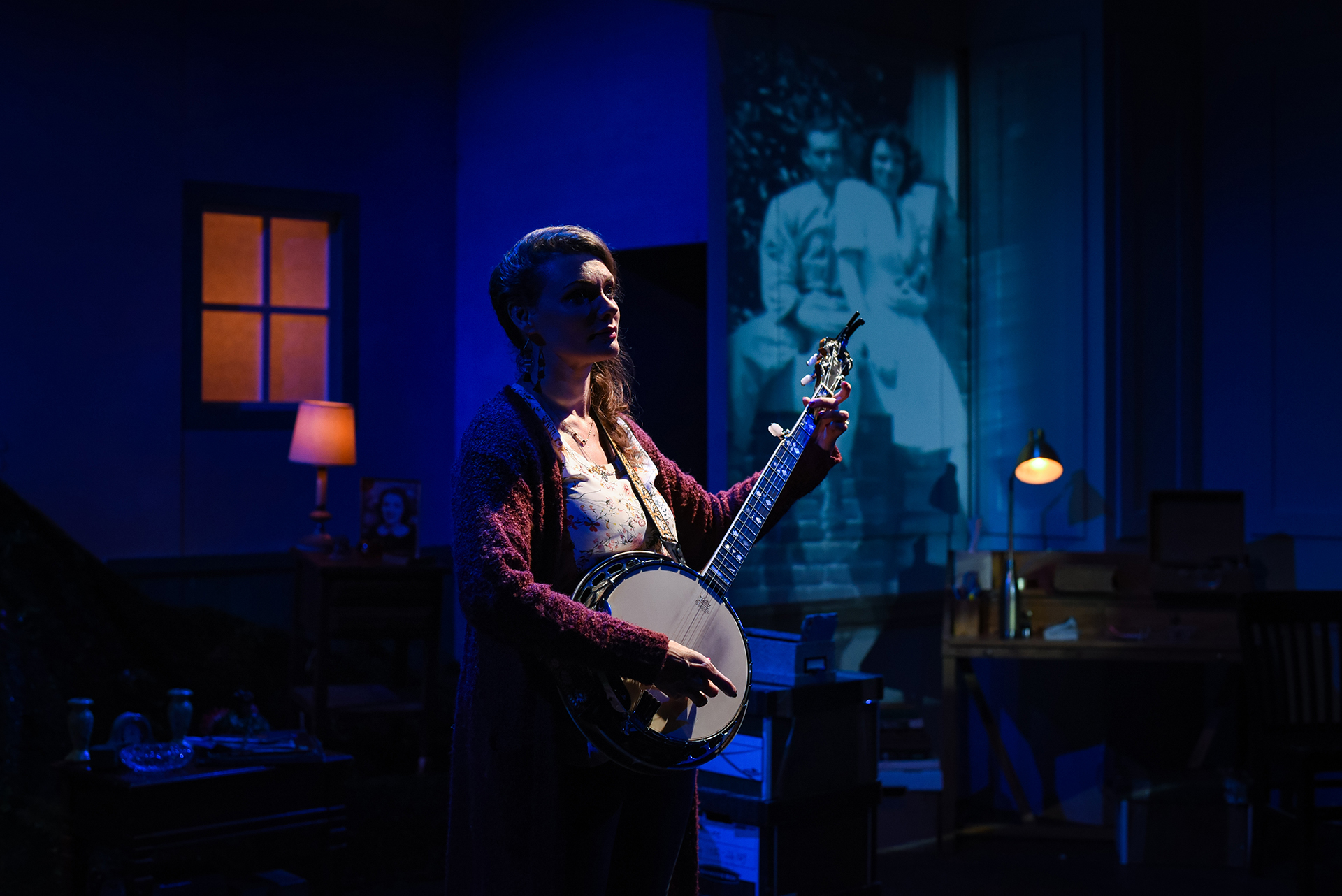 BWW Interview: Miranda Barnett of THE HEATH at Warehouse Theatre

This article was originally written by Neil Shurley and published by Broadway World on January 3, 2020.

Lauren Gunderson’s charming, heartwarming play THE HEATH makes its upstate premiere this month at the Warehouse Theatre in Greenville, SC.

THE HEATH features “a powerful female character driving the action and a wide array of elements from science to Shakespeare to banjo aiding the story as it springs to life.”

The Warehouse production stars Miranda Barnett, who also originated the leading role in the play’s world premiere at Merrimack Repertory Theatre last year. An accomplished singer and strikingly dynamic actor, Barnett taught herself to play banjo for the role. We asked her to tell us a little about that process as well as about the play.

Disclaimer: If you read carefully, you may note that your humble correspondent is part of the story…

BWW: First, please tell us a little about yourself.

I am a native Greenvillian, and live in the home purchased by my great-grandparents in 1936 with my husband, Aaron, and son, Wilkes. I went to Wade Hampton High School, and spent a summer at The Governor’s School for the Arts when it was still held at Furman University. At that time, I was minimally involved with theatre and was primarily focused on classical voice, which I went on to study at Florida State University. In the ten years following graduation, I did A LOT of things, not one of them being classical singing, and eventually found my calling as an actor. THE HEATH has been the first opportunity in my career to bring together the things that I love most: telling incredible stories, and making music (as a singer and instrumentalist.)

Tell us a little about THE HEATH and how you first came to be involved with it.

From my perspective, it began in, I think, July of 2018, when I got a text from [Warehouse Theatre Artistic Director] Mike Sablone that said something like, “Do you play the banjo?” And I was like, “um….No. ……. BUT, I have played a little guitar so I can probably learn.” I then got an email from Sean Daniels at Merrimack Repertory Theatre in Lowell, MA and was asked to submit an audition for this new Lauren Gunderson play they were producing in the upcoming season. No banjo or singing was requested at this time, mind you, just an excerpt of the text. About a week after I sent the video, I got a response from Sean saying, “Great! Lauren and I talked it over and we’d love to have you do it.” And I was thinking, “Are you sure about that??” but what I said was, “YES! (Now, I need to learn the banjo in 6 months)”. Which I did, and here we are.

What was it like trying to learn a new skill – the banjo – specifically for this show? Had you done anything comparable for other shows in the past?

I have never had to learn a new instrument for a show. Actually, I’ve never played an instrument in a show either. I studied piano for 14 years, but again, that was classical training exclusively, and the last time I played in front of any audience was around 2001. So, yes, a huge challenge, but with a little background in guitar, I felt I was up to it. I immediately borrowed a banjo from my friend, Neil Shurley 🙂 and set to learning specifically the music for the show. I knew I didn’t have time in 6 months to learn any real technique or fundamentals so Youtube was my friend. I watched tutorials for the gospel tunes, and Lauren sent me videos of her playing her originals. I learned to play what I had to play, but I would love to take lessons and legitimately learn the instrument one day.

How did audiences respond to that original production?

They loved it. The thing that was most surprising was how during practically every performance, these northern audiences were singing along to the old gospel songs. I would’ve expected that in the South, but not in a Boston suburb. It was lovely.

How will The Warehouse production be the same/different?

Only the lighting and projections will be newly designed (by the fabulous Maranda DeBusk), otherwise it is the same show. However, it will resonate in a different way. With its roots set right here in the Carolinas, references to Gaffney, Cowpens Battlefield, Duke Power, and the Braves will mean much more to our local audiences.

What do you hope upstate audiences will take away from this show?

The take-away is universal…

Don’t take your loved ones for granted. Say what you need to say, and ask the questions you need to ask while you still can. Show up. “Look there.” And if you are haunted by a feeling that you didn’t, that you should have done more before it was too late, give yourself a little grace. We’re all doing the best we can.

After THE HEATH, you’ll jump right into The Warehouse production of HEDWIG AND THE ANGRY INCH. What are you most looking forward to about that experience?

Honestly, these are two dream roles back to back! Before I started rehearsals on THE HEATH, I knew that it was the biggest challenge I’d ever faced as a performer. And now I feel that way about playing Yitzhak in HEDWIG. Yitzhak is the most “out of my box” role I’ve ever taken on and will require the greatest transformation – in every sense. I have loved the show in such a profound way for so long, so I’m still in a bit of shock that I get to be a part of it.