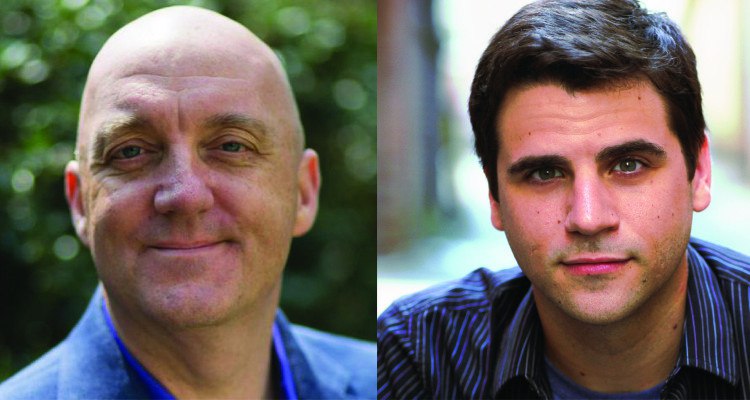 By Jason JohnsonDecember 31, 2015No Comments

The 5th Annual Shakespeare Boot Camp at The Warehouse Theatre is scheduled for February 13th and 14th.  This two day intensive (which costs only $10) will bring two wonderful teachers, Robert Richmond and Thomas Azar, to The Warehouse to work with actors on performing Shakespeare.

Robert Richmond is a director and the Associate Chair/ Co-Artistic Director, Director Undergraduate Studies and Head of Undergraduate Performance in the Dept. of Theatre & Dance at the University of South Carolina.  Thomas Azar is a member of Actors Equity Association and a graduate of the MFA program at the Shakespeare Theatre Company’s Academy for Classical Acting.

Robert’s approach focuses on encouraging actors to explore space, time, physicality, and relationships in unique and creative ways. Participants will be asked to make bold acting choices while honoring the complexities of heightened language and will develop skills to incorporate these aspects into a modern interpretation.

Thomas will work with actors on text and technique with the goal of making strong, vital, and complex choices which clearly communicate the language and character in service of the story.

Both instructors will approach their workshops with the goal of harnessing creative energies and ideas to bring Twelfth Night from the page to stage.

The Shakespeare Boot Camp is open to all actors regardless of experience. Space is limited. To register, please contact Mallory Pellegrino at [email protected]

Participants will be asked to review the text of Twelfth Night and become familiar enough with it to employ that knowledge in a workshop setting. Specific scenes/passages will be assigned for group and individual work.

More information on our guest artists can be found below:

Robert Richmond is originally from Hastings, England, and studied at the Royal Scottish Academy of Music and Drama. He is currently an Associate Professor at the University of South Carolina, Co-Artistic Director of Theatre South Carolina, Associate Chair of the Theatre & Dance Department, and the Director of Undergraduate Studies/Performance.

Robert is an Associate Artist at the Folger Shakespeare Theatre in Washington, D.C. He has directed Henry VIII (which was nominated for 10 Helen Hayes Awards, one of which was for Outstanding Director of a Resident Play) Othello, Henry V, Twelfth Night, Richard III, and Julius Caesar. His scholarship with the Folger also includes a multi-year commission to direct, design and produce audio productions of the complete works of Shakespeare. These are the first unabridged recordings in American English of Shakespeare’s canon, and create a
unique juncture between the scholarly world of Shakespeare’s texts and performance. The recordings are published by Simon & Schuster and accompany the Folger’s printed editions of the plays, all are available for download on iTunes and reach a global audience. Othello, Hamlet, Macbeth, Julius Caesar, Romeo and Juliet, and Richard III are now available to purchase and there are plans for more titles in the future with the development of an interactive iPad app.

Prior to his position at USC Robert taught at New York University, Tisch School for the Arts, in the Classical Studio, and was a scholar at NYU’s Center For Ancient Studies. For Thirteen years he was the Associate Artistic Director for the Aquila Theatre Company, the professional company in residence at NYU, and directed over forty shows and administered twenty-four tours across the nation and Europe.
In 2003, Aquila became a flagship company for the National Endowment for the Arts Shakespeare In American Communities initiative, and performed a command performance at the White House. This was the first time Shakespeare had been performed in the White House for over 25 years.

Robert is a founder member The Center for Excellence in Classical Theatre Training, at Oklahoma City University. CECTT will be launched in 2017 and will serve the professional development of teachers of acting, movement, dramaturgy, design, combat and voice for classical theatre. It will be a membership organization that facilitates continuing professional development of classical theatre teaching artists, practitioners and researchers.

For 2013-14 his production of Richard III at the Folger Theatre was recognized as Best Play (Professional/Non-Tour): and Richard III – Folger Theatre – was voted Best Direction of a Play by the subscribers of Broadwayworld.com . His production of Hamlet at USC he was also voted the Best Director of a Play and he was awarded Theatre Artist of the Year by the same publication.

Thomas Azar is a member of Actors Equity Association and has worked regionally with theatres across the United States including TheatreWorks, California Shakespeare Center, TheatreQ, Playwright’s Foundation, and The Lost Colony. A seasoned movement and combat choreographer, Thomas studied classical text under Michael Kahn, Gary Logan, Floyd King, Edward Gero, Brendan Fox, Isabelle Anderson, Dody DiSanto, Roberta Stiehm, and Brad Waller among others. He received his Bachelor of Arts in Theatre at the University of Alabama and his Master of Fine Arts from the Shakespeare Theatre Company’s Academy for Classical Acting.