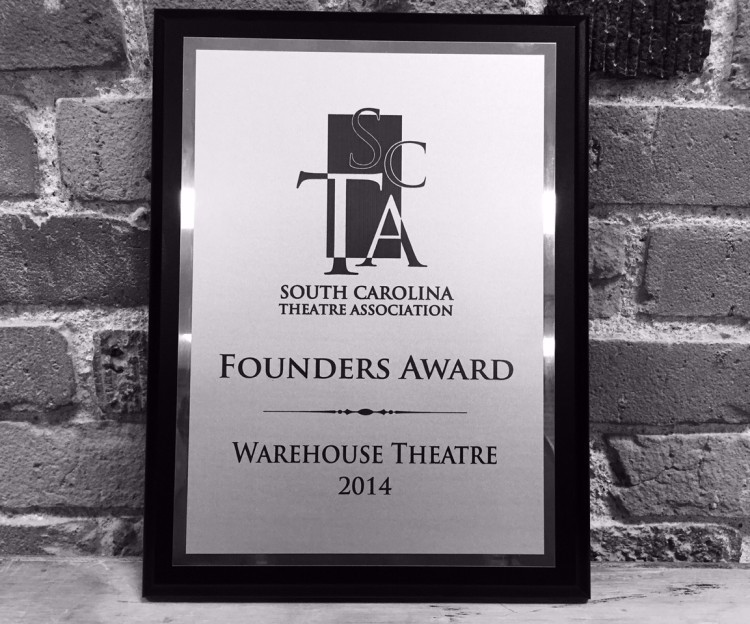 Founders Award Given to The Warehouse Theatre for Overall Organizational Excellence

The South Carolina Theatre Association held its Annual Gala on Saturday night, May 16th in Columbia, SC. The Gala not only promotes the mission of the organization, but also distributes awards for excellence in theatre production throughout South Carolina.

This year The Warehouse Theatre was presented the Founders Award for being a focal point for theatre in South Carolina and an emerging leader for theatrical excellence in the region. Maegan Azar, President of the SCTA, remarked when presenting the honor, “Warehouse is a community of stellar artists. The creative team and staff members of Warehouse are a passionate group of theatre professionals. They create intensely, they tell stories artistically, and they dream enormously. Each time an individual artist walks into this space, they leave as a member of a community because you are changed by the work that these people create.”

Roy Fluhrer stated in his nomination letter, “The 2013-14 seven show season featured Shakespeare’s The Tempest, Tracy Letts’ August: Osage County, and Tony Kushner’s Angels in America. The entire season represented the kind of mix that would be representative of our finest regional theatres. But, particularly, these three, challenged audiences, actors and, importantly, this community to closely examine their assumptions and beliefs about what it is to be called human – something that Theatre has been doing since the Greeks.”

Paul Savas, Executive and Artistic Director, accepted the award on behalf of the theatre. Savas says, “The SCTA does a fantastic job of recognizing and supporting the impact of all theatre organizations, professionals and educators throughout South Carolina and rewarding excellence in our state. To be recognized by them with the Founders Award, their most prestigious recognition, for producing works that challenge our patrons and our greater community and the breadth of our educational programming is a real honor. By presenting this award to us, they demonstrate that they are not only supportive of what we are accomplishing now, but what we are planning for the future.”