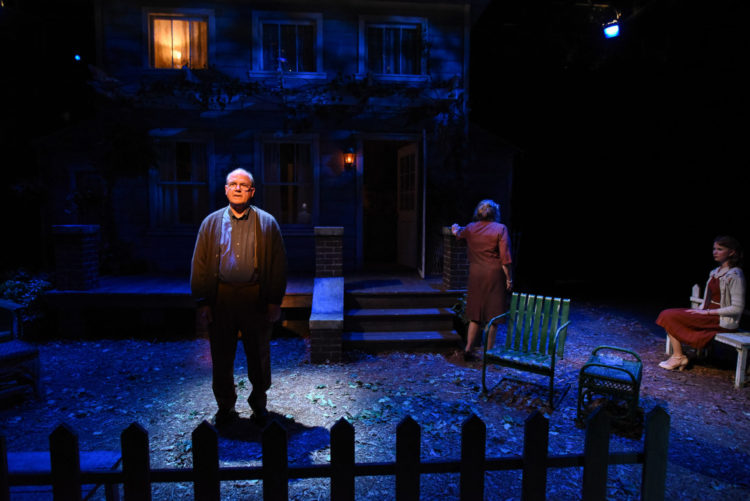 There’s a storm brewing right now at The Warehouse Theatre.

And I am not only referring to sound designer Marc Gwinn’s exhilarating, chest-pounding tempest that opens Arthur Miller’s “All My Sons” and morphs beaten wind chimes into a moody score.

There’s an emotional gale blowing through the Keller home and a family implodes before our very eyes in this tantalizing ironclad drama featuring a cadre of pros unilaterally immersed in Miller’s shrewdly-written roles.

One always enters The Warehouse space with a heightened expectation of artistic excellence, and this revival in director Blake White’s capable hands succeeds on every level from the first lighting strike to the final heart-clinching moment.

Seasoned performers Chip Egan and Mimi Wyche, in their first pairing since “Who’s Afraid of Virginia Woolf?” some six years ago, are Joe and Kate Keller in this play set somewhere in the Midwest just a few years after World War II.

And though the war may be over, its effects are felt daily in the Keller household and in their neighborhood. They survived the Depression but lost their prodigal son Larry, whose plane went down three years earlier and is still missing and presumed dead. As Joe says, “Well, that’s what war does. I had two sons, now I got one. It changed all the tallies.”

But Kate, bolstered by the occasional miraculous stories of soldiers still finding their way home, patiently awaits his return; though during the opening storm the tree the family planted in Larry’s honor has fallen, a metaphor not lost on their younger son Chris, played by the remarkable Torsten Johnson.