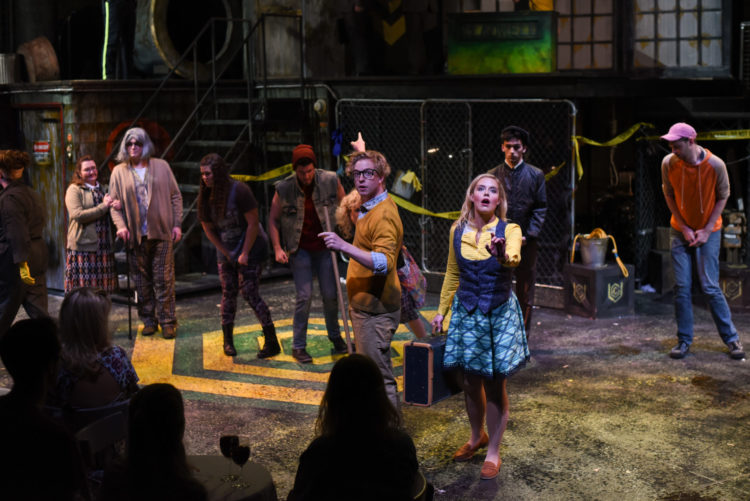 By Jason JohnsonSeptember 19, 2016No Comments

Don’t be deterred by that famously unpleasant name.

The Warehouse Theatre’s “Urinetown” is a dynamite show, a gleefully biting satire of corporate greed, political corruption and Pollyanna populism.

Director Nancy Halverson brings a bracing energy to this musical set in a miserable town where darkness prevails and private urination is prohibited.

The city, you see, has been devastated by a catastrophic 20-year drought. Because of water shortages, private toilets have been banned.

All public toilets, meanwhile, are controlled by a megacorporation, Urine Good Company, ruled by the grasping, tyrannical CEO Caldwell B. Cladwell.

The poor of the city, led by the young Bobby Strong, decide to fight Cladwell and his political stooges for the right to urinate for free.

Take away the edgy, urban trappings, in other words, and what you’ve got is a David-and-Goliath fable, with the scheming fat cat Cladwell (any resemblance to a presidential candidate is purely coincidental, I’m sure) and an oily, colluding politician, Senator Fipp, serving as a composite Goliath.

The Tony Award-winning show’s creators, Mark Hollmann (music) and Greg Kotis (lyrics), take aim not only at politicians and corporate ogres but also at American wastefulness in a context of finite natural resources. The show even alludes to the 18th century economist Thomas Malthus, who theorized that the world’s population would grow beyond the earth’s ability to support it.

If that sounds rather heavy going, Hollmann’s ceaselessly chipper score guarantees a cheerful ride to the apocalypse.

Along the way, the irreverent show zestfully mocks itself and other classics of musical theater.