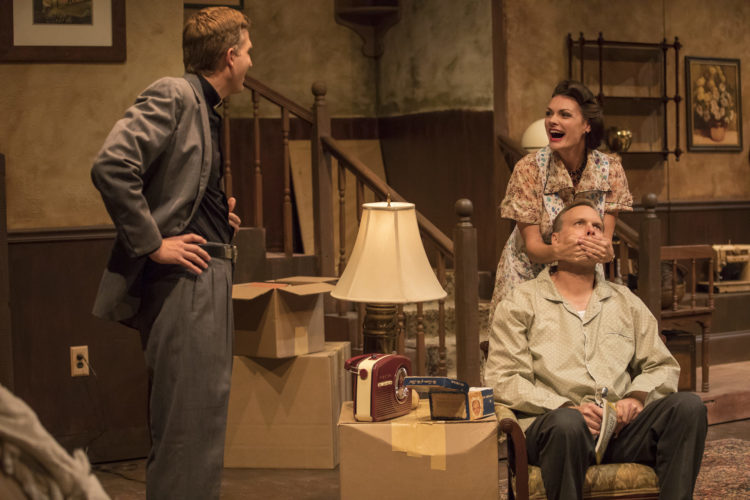 By Jason Johnson September 26, 2017 No Comments

Deconstruct Bruce Norris’s Clybourne Park all you want. Critics with brows higher than mine have drilled plenty into the script: “The first act conveys provocative fill-in-the-blank, and the not-as-good second act delves into even more profound fill-in-the-blank.”

Sure, go ahead and dissect down to when the lamp almost breaks—because everything in our high-anxiety lives is almost broken. Or examine when the June Cleaver-housewife character tries to buy her African-American help’s affection with a chafing dish—because we’re all ineptly superior. Or scrutinize “the skiing Negroes” comment—because fill-in-the-blank.

Of course the script sizzles; you don’t win a 2011 Pulitzer Prize and then a Tony Award for a second-rate comedy-satire-drama. Which leaves us to discuss The Warehouse Theatre’s brilliant handling of brilliant material.

In WHT’s 44th season opener, the seven cast members work double-hard: each performs not one but two roles.

The first act takes place in 1959. Russ and Bev are moving out of their longtime home at 406 Clybourne St. in Chicago, which happens to be the same address of Lorraine Hansberry’s seminal 1959 A Raisin in the Sun. It seems the address’s white couple sold the home (inadvertently?) to—gasp!—a colored family.

Act II moves up 20 years, to Obama-era 2009, with the same actors in reversed roles. Steve and Lindsey, a white couple, are moving into the house, which now happens to be in a black neighborhood. They discuss gutting it, while a black couple looks on, none too thrilled with the planned overbuilding gentrification.

Along the way, we’re treated to fine subplots, etc. etc., and plenty of zinging clichés, so let’s focus instead on the acting: the Woody Allen-esque stammering; the Aaron Sorkin-fast crosstalk; the perfectly timed eye roll; body language that screams snark; the offensive defensiveness of the white man who, in 1959, is “only” protecting his family when he screams! about incoming Negroes destroying his neighborhood.

Brock Koonce works magic with Karl and Steve. A stalwart of the Greenville boards, Koonce own his first-act Karl, a black-rimmed-glasses, thin-tie, 1950s-era race-aholic who also happens to be Hansberry’s Karl Lindner.  In Act II, Koonce deftly handles Steve, who also over-talks himself into squirmy, if hysterical, social injustice. While critics and fans find Karl/Steve color-obsessed douchebags, Koonce somehow makes them … sympathetic characters. In Act I, Karl simply reflects a pre-Civil Rights white man we would prefer to forget. In Act II, Steve’s an urban white guy we’d prefer not to know. Koonce skillfully shows us that Karl/Steve was/is, at times, us.

Another standout is the stunning Jennifer Webb. In her WHT debut, she’s Betsy and Lindsey. In Act I, Betsy is pregnant and deaf, and Webb’s convincing hearing-challenged person who can still talk somehow provides a light touch amid the devastating satire. In Act II, her Lindsey, who isn’t deaf but is pregnant, is a formidable big-city professional. Webb’s heavy-lifting in roles that could be dismissed as lightweight shows that she’s working hard to make tough situations look effortless. That’s the essence of talent.