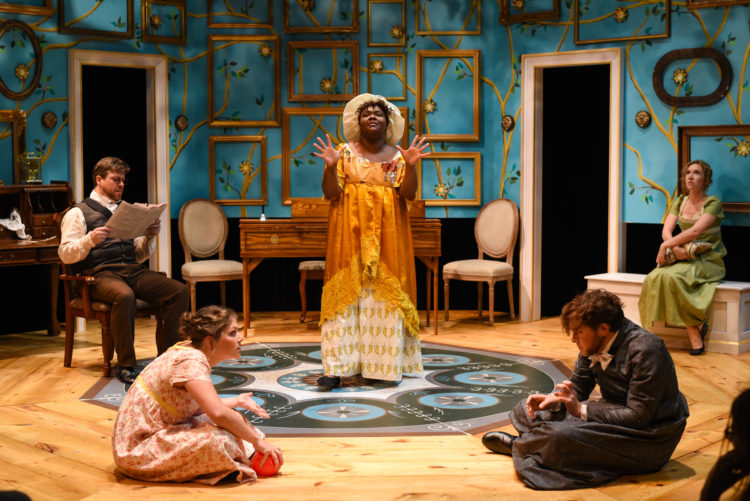 BWW REVIEW: Bright and Funny New Adaptation of Pride and Prejudice at The Warehouse Theatre

By Jason JohnsonJune 12, 2019No Comments

This review written by Neil Shurley was originally published by Broadway World on June 12, 2019.

You know the title, and probably even some of the character names, even if you’ve never actually read the Jane Austen novel. And maybe you’ve seen one of the movie versions or the BBC TV adaptation or read the mashup novel Pride and Prejudice and Zombies or watched/read Bridget Jones’ Diary, or—look, the point here is that Pride and Prejudice is steeped into our cultural DNA. And whether you think you know the story or not, you know it. It’s the original Downton Abbey – upstairs highbrow characters only, though, not many servants here.

All that to say there’s a new Pride and Prejudice in town and, well, it’s not your grandma’s Pride and Prejudice. Kate Hamill‘s brisk new stage adaptation, now playing at Greenville, SC’s Warehouse Theatre, is delightfully antic and deliciously revelatory.

Wonderfully directed by Jay Briggs, this iteration of Pride and Prejudice features a cast of eight actors – most of them playing more than one role – gamely giving us a Cliff’s Notes version of the story while also working hard to make us laugh.

Amanda Sox plays Lizzy, the most thoughtful of the Bennet sisters. She meets the wealthy but seemingly arrogant Mr. Darcy (Thomas Azar) and, over the course of the evening – well, would it shock you to know that they might just end up together? I mean this is a romance story after all. But there are other romances to explore, and other sisters to meet: eldest Jane (Jennifer Webb), youngest Lydia (Clare Ruble), and darkly serious [insert ominous thunderclap] Mary (Christopher Paul Smith). There are also parents and neighbors and suitors – both suitable and unsuitable – but in the end none of that really matters, because this is ultimately a show that’s more about the execution than the actual material. And it is executed brilliantly.

Playwright Hamill turns Jane Austen‘s text into a slapstick romp, with actors almost continually in motion, sometimes even switching between characters during a scene. This is comedy that’s simultaneously highbrow and lowbrow and I absolutely adored it.

The cast is uniformly terrific. Thomas Azarand Amanda Sox come the closest to playing things straight, to actually creating realistic(ish) characters. And that’s a tribute to them both. Azar and Sox have both demonstrated their dramatic and comedic chops many times on upstate stages, and with a play like this that can border on cartoonish at times, the fact that they can still conjure some human moments amidst the chaos is a wonder indeed.

The other performers also manage some balancing acts of their own, but for them it’s about quickly slipping in and out of the personas of multiple characters. Rather than trying to provide a list of how the actors performed their many different characters, let me share some snapshot moments that stuck with me. Bretteney Beverly’s over-the-top laughter. Aaron Brakefield’s deliberately clueless father. So many moments of Skye Passmore‘s wide eyed delivery. Clare Ruble’s hilariously spastic Lydia – both the way she contorts her body and the way she delivers the lines have made me a veritable superfan from this one show. Christopher Paul Smith‘s coughs. And as much as I love Jennifer Webb‘s rather warm portrayal of sister Jane, I don’t believe I will ever forget her veiled performance as Miss De Bourgh. – trust me, you have just got to see this.

Along with the terrific performers, special mention must go to some key crew members. And I’m not just talking about Will Lowry’s great set, Allison M. Steadman’s spot-on costumes, Alicia Varcoe’s light design, Marc Gwinn‘s sound design or Katie Halstengard’s prop design. It goes deeper than that. For a show like this to work, the behind-the-scenes action has to be just as polished as the performances, and light/sound board operator Katie Mansure is definitely the unsung hero, nailing the many technical cues required — cues that sometimes generate laughs all by themselves. And special kudos go to Lily Mayfield and Lexie West who live in the visible wings of the set, helping with costumes and props in real time.

One of Lizzy Bennet’s more famous lines is “Think only of the past as its remembrance gives you pleasure.” If that’s the criterion, then I shall be thinking of this production of Pride and Prejudice very often indeed.