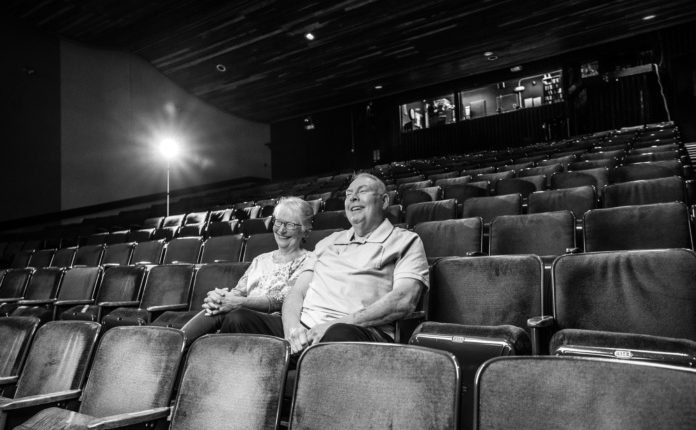 This preview was originally published by the Greenville Journal (writer – Paul Hyde) on May 15, 2019.

They see it all: High school musicals. University plays. Community theater productions of all sorts. A little opera, too.

Three times a week, on average, the husband-and-wife theater-goers travel from The Woodlands at Furman as much as two hours, round trip, to catch shows not only in Greenville but also in Spartanburg and Anderson.

That’s about 150 shows annually for the past eight years. They’re regulars at about 15 Upstate theaters. They’ll see some performances two or three times.

No surprise, they’re hugely popular in the theater community.

“I’ve worked in theater for over 40 years, in a lot of different places, and I’ve never seen anyone as supportive of an entire theater community as Bert and Emily,” said Allen McCalla, executive artistic director of Greenville Theatre.

Last Saturday, Wakeley was honored in Greenville by the South Carolina Theatre Association with its 2018 Theatre Advocacy Award. Wakeley not only attends performances but spends hours on Facebook promoting the shows, praising actors and tech crew members by name. At age 75, both Wakeley and Melton show no sign of slowing down.

But who are these two tireless theater aficionados?

“Bert loves to say we met in a bar,” Melton said, with a laugh.

Actually, a mutual friend introduced them at a restaurant in Washington, D.C.

“I loved her smile,” Wakeley said.

“We were good friends over a year before we got romantically involved,” Melton said.

They’ve been married 25 years. Melton earned a journalism degree and lived in the Haight-Ashbury area of San Francisco during the legendary Summer of Love in 1967. Later, she worked as an administrative assistant for a couple of governors, ending up in Washington D.C. as executive assistant to personal finance legend Austin Kiplinger.

Wakeley worked for five governors – three Republicans and two Democrats — in three states, including as chief of staff to Gov. John Sununu in New Hampshire. He spent 20 years in the private sector at four technology companies as national director of business development for state and local government.

In their working lives, they enjoyed live theater only sporadically. Once they arrived in the Upstate to retire in August, 2006, they gradually discovered the theater scene, beginning with the Peace Center and later embracing every other theater in the Upstate.

The Greenville Journal recently caught up with Wakeley and Melton by phone.

The Journal: What inspires you to see so many shows in the Upstate?

Bert Wakeley: The Upstate has such a depth of talent in the theater community – actors and production crews. It’s just amazing around here.

Emily Melton: It’s not only seeing the wonderful plays but also seeing theater people grow over the years and seeing the theater scene grow and improve through the years.

Wakeley: Yeah, many theaters in the Upstate have really upped their game in the last four or five years. The Warehouse Theatre has improved its product and gotten more diverse. The Younts Center’s recent “Hunchback of Notre Dame’ was a big step for them and it was amazing – the acting, the singing was all phenomenal.

The Journal: You’ve seen a lot of shows over the past eight years. Do you have some favorites?

Melton: It’s usually the most recent show we saw.

Wakeley: It’s hard to say. There are so many great shows in the Upstate: the rock ‘n’ roll shows at Centre Stage, “Les Miserables” and “Ragtime” at Greenville Theatre, “Richard III” at Warehouse Theatre.

The Journal: Seeing 150 shows a year probably can get a little expensive, yes?

Wakeley: A lot of people retire and travel. Well, we traveled a lot before we retired, so we decided that we’d spend our money on things we like to do. After visiting the theaters, we decided this was tremendously enjoyable, and the talent around here is phenomenal.

The Journal: In your Facebook posts, Bert, you like to remind readers of the importance of the backstage crew.

Wakeley: Most people have no idea what goes into making a show successful – to make sure everyone’s mic is working, the spotlight is on the right person, the sound effects happen when they should, the costumes get changed. We just want to make sure that those involved in making that happen realize that they are appreciated. They deserve a lot of credit. We want them to understand they are valued. There’s somebody on the sound board, somebody on the light board. There are all these people who’ve built the sets. Everybody has to work together to make a successful production.

Melton: What Bert has built is an online community of theater people who he reaches out to before and after each performance we attend. When we walk into a theater, everybody knows Bert. After the show, we always stay and talk to the actors and production crew about what we liked…

Wakeley: …and to thank them.