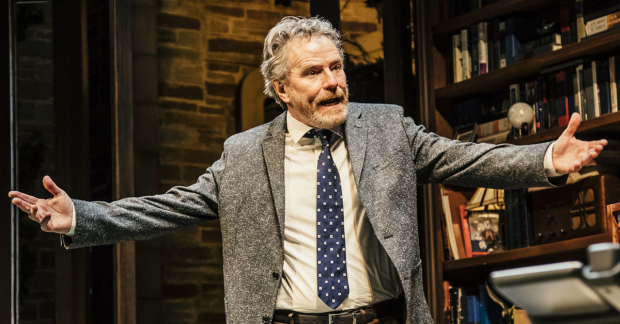 Interview: Through Power of Sail at the Geffen, Bryan Cranston Examines His Place in the World

This TheaterMania article by David Gordon was originally published on February 14th, 2022.

For his first appearance at the Geffen Playhouse in more than a decade, Tony and Emmy winner Bryan Cranston is taking on yet another juicy role that allows him to blur the lines between virtuous and ruthless.

In Paul Grellong’s Power of Sail, Cranston plays Charles Nichols, a renowned Harvard history professor under fire for inviting a white supremacist to speak at his yearly symposium. Unfolding in a non-linear fashion, the chilling drama, which also features Amy Brenneman, Seth Numrich, and Brandon Scott, under the direction of Weyni Mengesha, exists in a world very much like ours, where personal gain is prioritized over integrity and the question of whether or not hate speech is free speech hangs like a cloud in the air.

Even for Cranston, who has made a career of playing difficult characters of ambiguous morality, Power of Sail has been a tough one to crack, mostly because the play, the pandemic, and the ongoing social unrest, has really made him reconsider his place in the social structure of the world. But if there’s anyone up for the challenge, it’s him.

This conversation has been condensed and edited for clarity.

Way back before Covid, you were supposed to be directing something at the Geffen, but that morphed into you acting in Power of Sail. Tell me about that trajectory.
I had gotten a call from Matt Shakman, the artistic director, who asked me to come back and do something for the 25th anniversary season, because I’m an alumnus. I did God of Hell, the Sam Shepard play, back in 2006 just after I had finished Malcom in the Middle. I’ve directed one-acts, but never a fully staged play, so I was hunting for something to direct that really caught my eye. I kind of wanted to do a comedy, because I’ve been doing a lot of dramas recently, but I didn’t want to do a slamming-door comedy. I wanted something that had some bite to it.

Then it dawned on me: what about The Foreigner by Larry Shue? I remember seeing that play because my friend Patricia Kalember was in the original production. It’s hilarious and we’re laughing at the hateful ideology of the KKK and white supremacy, and all that stuff. We started thinking about how I would want to do it, and then the pandemic hit, and then George Floyd’s murder, and, before that, Charlottesville.

Almost immediately, it was like, “I don’t think this works anymore.” I had to accept my white privilege and the blind spots in my life by saying, “Well, sure, it’s easy for me to laugh at the hateful ideology of white supremacists and the KKK because I am not affected by them.” I had the luxury of doing that, and that’s not acceptable. It’s not funny. The Foreigner became the proverbial dated material.

I told Matt that it wasn’t my time — if we’re truly looking at developing equality, I’m going to step aside for emerging BIPOC voices in the theater and really make that space. If they find something that they need an old white guy to be in, I can facilitate that to help the cause, but it’s not for me to jump to the head of the line. So we started looking for a couple of other things, and then my assistant said, “What about that play John Krasinski sent us?”

And that was Power of Sail.
John sent it to me when I was doing Network. When you’re doing a play, the last thing in the world you want is to think about another play. But he wrote to me and said, “I thought of you when I read this.” It’s very challenging, and another damaged character, which is exactly what I was expecting and is kind of in my wheelhouse. I guess I love characters that are not all good or all bad. I just relate to it.

Matt connected with Paul Grellong, the playwright, and pretty soon, it was a selection. We wanted a woman of color to direct us to really bring out all of the sides in it, and Weyni Mengesha is fabulous. She has such a beautiful comportment to her, in the sense that she never gets riled. She has a calm, nurturing sensibility, and she cuts to the chase. And she’s not afraid of the challenge.

I imagine it is a challenge — it’s a tough little puzzle of a play. I read it, and then had to reread it to see how all the parts fit together.
When it was done at the Warehouse Theatre in South Carolina, Mike Sablone, who is the artistic director and is one of our producing consultants, said that it was the first time in his experience that he ever had returning customers who came back just for the fact of figuring out, to see if they could track this. It’s like a runaway train for me. Once the play starts, for the next 80 minutes, I’m going crazy. And then I get a break to get a drink of water and calm down for a second.

And the story is so current it could have been on the news last night.
When I first read it, which was about this time in 2019, it was pre-pandemic, pre-BLM…Was this subject around? Yeah, of course. Was it seen? No. We hadn’t been enlightened. The process of selecting this play and bringing it to life really opened my eyes to my own blindness. I’ve lived 65 years under a certain belief system that I was taught or that I learned through my environment or education, whatever, and it belies an undercurrent of truth. That we don’t thoroughly go in and dissect the structures of how this country was created and the systemic racism that has always been there is astonishing to me.

What do you want people to feel and talk about when they see this play?
In this play, my character’s argument is pretty sound. And it does, nightly, get appreciation for the argument about free speech and open debate. “You have to support it even if you don’t agree with it.” How many times have we heard that? “We should all be willing to listen to an opinion that’s not my own.”

And then there’s hate speech and deniers of truth. We’re experiencing that now, as we see. “The election was stolen?” This is a lie and you’re perpetuating that lie. Should we give the person who spews that lie amplification to once again tell that lie? At one point in the play, my character is talking to his protege about the “paradox of tolerance.” When do we give someone a voice and when should we restrict it? I say, “The answer to hate speech is more speech.” And he says, “The answer to Nazis is clubs and bats.” And then I say, “But what’s the real answer?” And we don’t know.

We always want the finish of a play to be the continuation of a discussion, and hopefully our play creates that. This is intended to make people discuss, maybe even argue, on their way out, and hopefully they can’t shake it. I don’t want people to go “Let’s get a drink and think about it tomorrow.” This brings it to the surface. This is the way to open people’s eyes and make people see.