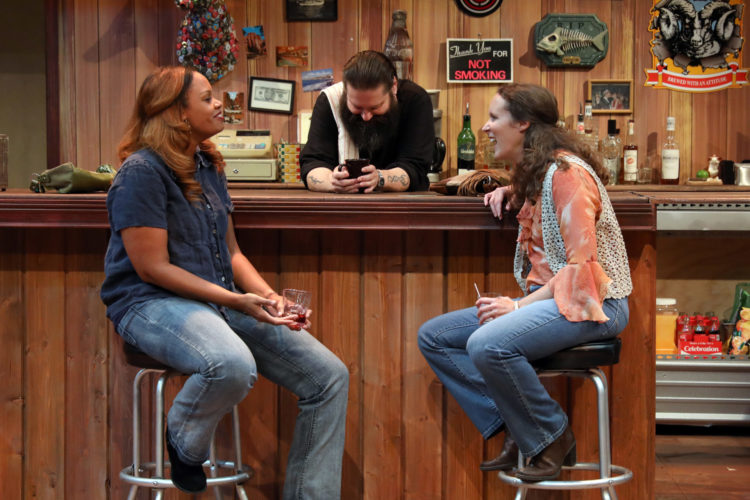 By Jason JohnsonFebruary 24, 2022No Comments

This preview from Neil Shurley was originally published in Broadway World on February 21, 2022.

For their 49th season, Greenville’s Warehouse Theatre offers a season of rebirth.

“Each show deals with people redefining who they are in the face of adversity, emerging stronger from tribulations,” Producing Artistic Director Mike Sablone told BWW in an exclusive interview. “It’s a diverse, funny, moving, sexy season. Exactly the kind of season we should be doing.”

While the titles and writers may be largely unfamiliar, Sablone insists that the playwrights are all among the best working today. “These are the playwrights every theater should be producing, and I’m proud to be on the cutting edge,” he says.

One cutting edge choice from their 2019 season, the world premiere of Paul Grellong’s POWER OF SAIL, is right now enjoying a second production starring Bryan Cranston, at L.A.’s Geffen Playhouse. Following on from that success, the Warehouse 2022-23 season will feature another world premiere, KILL CORP by Sofia Alvarez.

Sablone calls the new season a celebration of what makes the Warehouse the Warehouse. “It’s a vital, theatrical, exuberant season that doubles down on what the Warehouse does best: produce relevant, exciting productions that you will not get anywhere else-not just in the Upstate, but also the country.”

Here is a list of the 2022-23 Warehouse Theatre Season along with comments from Sablone about each show.

Nya, an inner-city public high school teacher, is committed to her students but desperate to give her only son Omari opportunities they’ll never have. When a controversial incident at his upstate private school threatens to get him expelled, Nya must confront his rage and her own choices as a parent. But will she be able to reach him before a world beyond her control pulls him away?

SABLONE: “With profound compassion and lyricism, PIPELINE brings an urgent conversation powerfully to the fore. Morisseau pens a deeply moving story of a mother’s fight to give her son a future – without turning her back on the community that made him who he is. It is an important, moving play that still manages to find pressure release laughs throughout. I’m proud to be the first theatre in the upstate to produce Dominique’s work, especially this play about how hard it is to connect with others when the system is built for one experience.”

Play by Jen Silverman
Based on THE WITCH OF EDMONTON by William Rowley, Thomas Dekker and John Ford
December 2 – 18, 2022

Mischief is afoot in the sleepy village of Edmonton and the fate of the world is at stake in this smart modern fable. When the emotionally conflicted son of the local lord and an ambitious newcomer come into conflict, help presents itself to both of them in the same guise-as the Devil himself. But while these two young men take advantage of the Devil’s bargain to accomplish their own questionable ends, someone else in town stands her ground-Elizabeth, an outcast whom everyone believes to be a witch.

SABLONE: “The first time I read this play I loved it from start to finish and started it immediately again. Jen Silverman is one of the best playwrights working today and here she has found eerie relevance in an old play that just as easily could be set today. A spin on a classic tale, it’s a sharp, sexy, subversive and laugh out loud funny fable that debates how much our souls are worth when hope is hard to come by.”

Marie has noticed that when her coworkers announce they are pregnant, they are fired. Trying to find a solution to this problem, she suggests to her best friend at work that they…kill the partners. Then she’d be in charge. She explains it’s all a joke…but is it?

SABLONE: “Sofia Alvarez is an in demand playwright and screenwriter. She has written the screenplays to the TO ALL THE BOYS I’VE LOVED BEFORE movies, all three smash hits on Netflix, and we’re the first ones to present a new play of hers! It’s a fiercely funny satire that skewers corporate America, and how we treat women who want both a family and a career. The first scene is one of the best I’ve read recently, and the ride Sofia takes the audience on as her protagonist meets with previous coworkers and her horrible bosses is a hilariously dark thrill ride with substance.”

THE LEGEND OF GEORGIA MCBRIDE

He’s young, he’s broke, his landlord’s knocking at the door, and he’s just found out his wife is going to have a baby. To make matters even more desperate, Casey is fired from his gig as an Elvis impersonator in a run-down, small-town Florida bar. When the bar owner brings in a B-level drag show to replace his act, Casey finds that he has a whole lot to learn about show business-and himself.

SABLONE: “It’s a big-hearted, music-filled comedy, as close to a musical comedy as you can get. It’s a true delight from start to finish, watching the transformation and ascent of an amazing drag queen with the help of a seasoned pro. I mean who doesn’t want to see a show where “The King” transforms into an all-out queen with the help of some new friends who become the second family he never saw coming? With snappy zingers and dance-worthy numbers, this wildly entertaining story will challenge your assumptions with extraordinary humor and depth. Why just live when you can be a legend?”

Harry Clarke is the story of a shy midwestern man who feels more himself when adopting the persona of cocky Londoner Harry Clarke. Moving to New York and presenting himself as an Englishman, he charms his way into a wealthy family’s life, romancing two family members as the seductive and sexually precocious Harry, with more on his mind than love. With his spellbinding and emotionally nuanced storytelling, Cale has created a riveting story of a man leading an outrageous double life.

SABLONE: “A one-man thriller taking full advantage of the skills of local AEA actor Thomas Azar, this is the kind of show that can only exist in the theater. One man portraying multiple characters, no set, just the performance and the story. It’s a sexually charged and wickedly funny thriller that asks questions both about identity and what we owe the people we love. Who is to say who you are other than yourself? And what does that say about you?”

Scarred by difficult home life and haunted by a recurring dream-vision of her lover learning he only has one hundred days to live, Abigail grapples with embracing the relationship as the two conspire to stretch time by making their days longer and fuller. The concert begins with a simple but poignant truism: “being alive is being in grief”, and explores the inevitable fact of death and how it informs the way we live our lives.

SABLONE: “I love concert musicals that use contemporary music to tell a story you haven’t heard before. The first time I heard the album, when I got to the title track I immediately said ‘yes, we’re producing this, yes.’ The fact that the story has even more resonance now, in year three of a pandemic, further solidified this as being the platonic ideal of a Warehouse musical. A life affirming theatrical experience with substance and incredible music.

“But also? Because a musical whose main thesis is ‘how do we make the most of the time that we have?’ feels like the best way to end a season about rebirth, a season built on the uncertainty of the last three years. A season that acknowledges the trauma we’ve been through by celebrating that we are still here, we still have reasons to gather together and celebrate and experience stories in the unique way only theatre can deliver.”