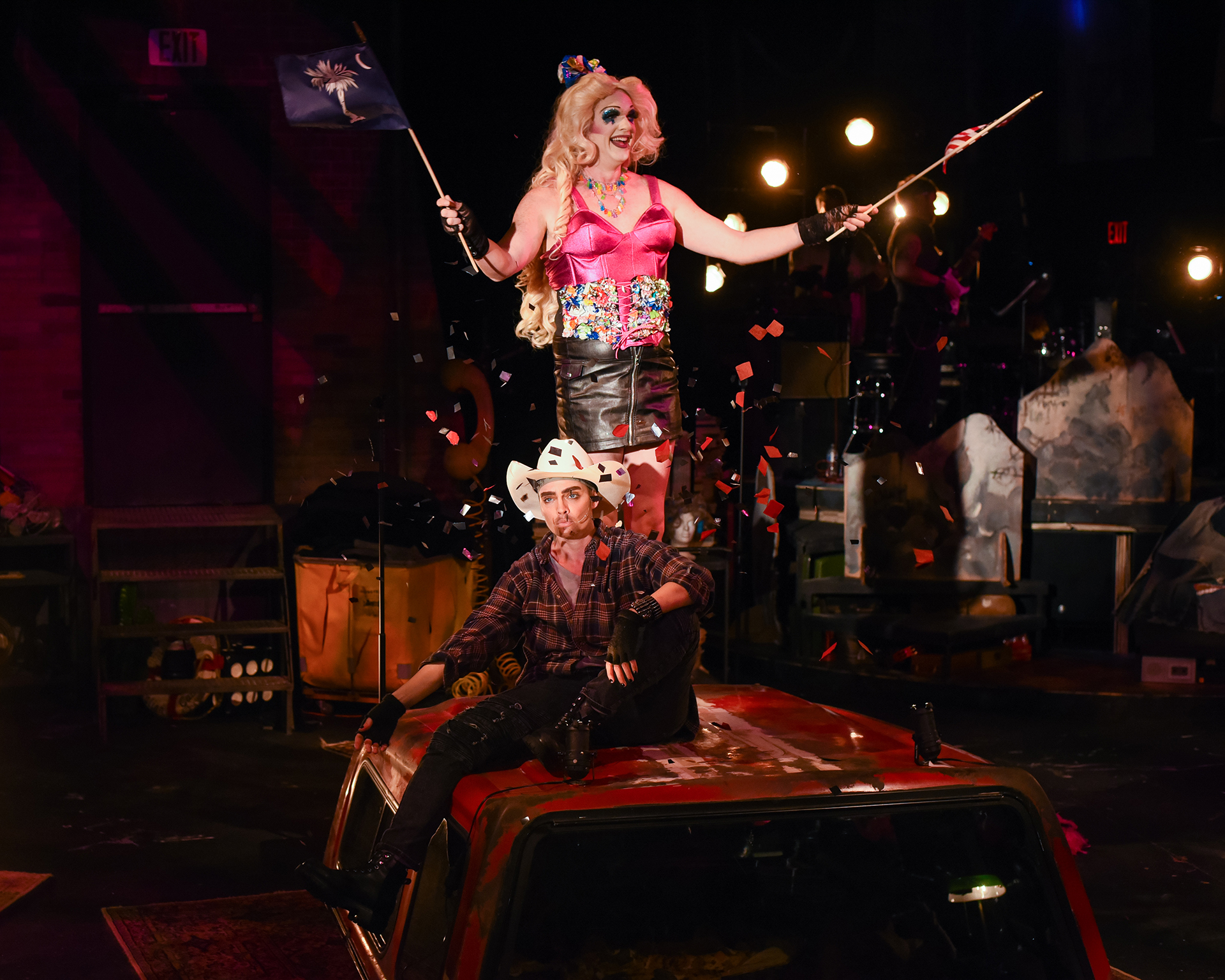 By Jason JohnsonMarch 4, 2020No Comments

One of the greatest joys of seeing a show at the Warehouse Theatre lies in a single moment, that pause of anticipation before walking through the doors into the actual performance space. What is it going to look like this time? Where will the audience be seated? How will the space be transformed?

And, maybe most importantly of all, how will I, as an audience member, be myself transformed?

For HEDWIG AND THE ANGRY INCH, the transformation comes in waves. First there is the physical space – the chaos of a theatre that, as described in the curtain speech, is recovering from a flooded basement, so there are wigs and costumes and stacks of scripts and, well, just junk everywhere. Scattered. Abandoned.

Then there’s Hedwig herself, an East German rock & roll goddess, or, more accurately – in her own words – “internationally ignored song stylist.” She’s here to give us a concert, along with her backing band, The Angry Inch, and her roadie husband, Yitzhak.

The concert turns into a confessional as she relates the story of her life – distant parents, inner confusion at the Berlin Wall, a botched sex change operation. And as the music continues, Hedwig transforms. Yitzhak transforms. And, ultimately, so do we.

As Hedwig, Clay Smith enters with enormous swagger and biting humor, playing with the audience, reacting in real time, even bringing in local references. The role demands a lot from a performer, both physically and emotionally, and Smith is simply outstanding – funny, vulnerable, and gut-wrenchingly real.

As Yitzhak, Miranda Barnett is also outstanding – grounded, hurt, and ultimately angelic. Barnett reaches deep here, showing us a whole new side, a whole new range, with a transformative singing voice to boot.

The band, led by LeRoy Kennedy, just kills it. There were a few times early on when it was difficult for me to make out lyrics, but for the most part the balance between band and vocals seemed just right.

Director Andrew Scoville and Scenic Designer Elizabeth Jarrett truly take advantage of The Warehouse space to make it utterly unlike any other production I’ve seen there. Teeming with levels and textures and an actual working bar, the stage brings to mind dingy industrial nightclubs and big city back alleys. Lighting Designer Kevin Frazier works his own magic, combining the blinding intensity of a late night underground rock concert with the theatrical creation of golden backlit halos deifying Hedwig’s head.

Special kudos also go to Costume Designer Ida Bostian and Wig Designer Gigi Monroe for their truly spectacular contributions. And don’t forget Victor De Leon, credited with Wig Maintenance, which the evidence suggests might be the most difficult AND the most important job in the whole show.

As I wrote this review, I was playing an LP I’ve owned for 30+ years, an Italian pressing of some of the Rolling Stones’ most well-known early hits. It’s an album best played overly loud. The music is raw and aggressive – metal before there was metal, punk before there was punk. The lyrics speak of alienation, desire, frustration – the currency of youth.

And it struck me that those early Stones hits had a similar energy and feel to Hedwig – both the character and the show. There’s a truth, an anger, underneath all of it that seem of a piece. Even the fact that I had a weird Italian pressing – complete with Italian liner notes that I’ll never be able to read – seemed somehow apt when thinking about the East German transplant, Hedwig, trying to fit in here in the states while also remaining true to herself.

This is a show that introduces us to someone we’ve never met, and who, even so, speaks to an inner struggle we’ve all felt: that pull to decide who we really want to be.

In the end, what can a poor boy – or girl – do except sing in a rock and roll band?