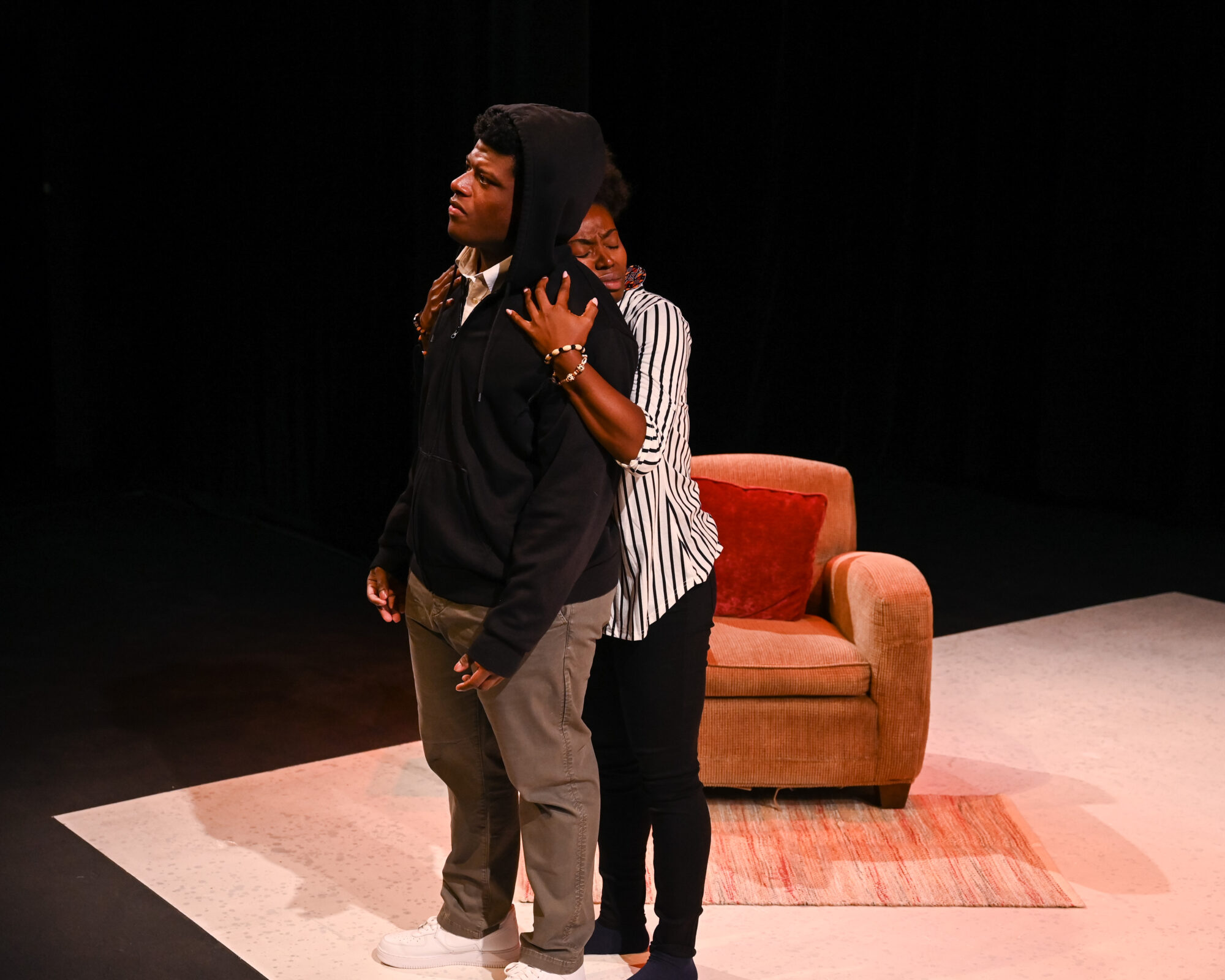 By Jason JohnsonOctober 11, 2022No Comments

Nya is a single mother. Sure, her ex-husband provides monetary support, but he’s never around – physically or emotionally. So Nya bears the full burden of raising her son, Omari, now on the path to graduate from high school. But not the school in which Nya works.

Nya teaches English in a rough inner city school – so rough, in fact, that one of her fellow teachers, Laurie, just underwent reconstructive surgery to her face for a knife wound she received in her own classroom.

Nya’s son Omari, on the other hand, attends a posh private school, thanks in large part to her ex-husband’s financial contributions. But just because Omari goes to a “better” school doesn’t mean he’s alleviated the anger he holds inside.

That anger triggers an incident that threatens to crush Nya’s dreams for Omari, sending him toward a fate she’s desperate for him to avoid.

That’s the setup of Dominique Morisseau’s pointed drama, PIPELINE, now playing at The Warehouse Theatre. The title refers to the “School-to-Prison-Pipeline” – described by the NAACP as American society’s emphasis on funneling Hispanic and African-American juveniles out of school and into the criminal justice system. The play is filled with dialogue and surprising poetry, as inner thoughts and harsh reality collide.

Take two minutes to listen to poet Gwendolyn Brooks describing and then reading her poem “We Real Cool.”

That poem flows throughout PIPELINE, underscoring, commenting on, and ultimately haunting the play and its characters. This is a show about issues and people, perceptions and stereotypes, education and race. What are our responsibilities as parents? As educators? As human beings?

Director Ahsha Daniels does not press her actors into histrionics or overly theatrical stagings. Instead, this is a play of dialogues, of discussions. It takes place on Tayanna McKelvy’s sparse set, suggestive of dorm rooms and living rooms and break rooms and, sometimes, inside Nya’s mind. Enhancing the atmosphere is Guillermo Jemmott’s sound and music design.

The performances are uniformly excellent, with Danielle Mills particularly real and memorable as Nya. Taji Mayberry brings a warmth and positivity to Omari – a warmth that makes it even more heartbreaking to watch him as he slowly breaks down. I loved Amiya English’s often hilarious turn as Omari’s girlfriend, Jasmine. Ptah Garvin is impossibly charismatic as Dun, the school janitor who smiles whenever he sees Nya. The always reliable Brian Reeder makes a terrific Xavier, Nya’s ex-husband, who struts onto the scene only to leave under very different circumstances. And Anne Tromsness is devastating as Laurie, Nya’s coworker whose role model is not exactly Michelle Pfeiffer in Dangerous Minds.

This is not a perfect show, but it is an important show. PIPELINE serves as a cogent reminder of that old truth – everyone you know is fighting a battle. And some of those battles are much more literal than others.