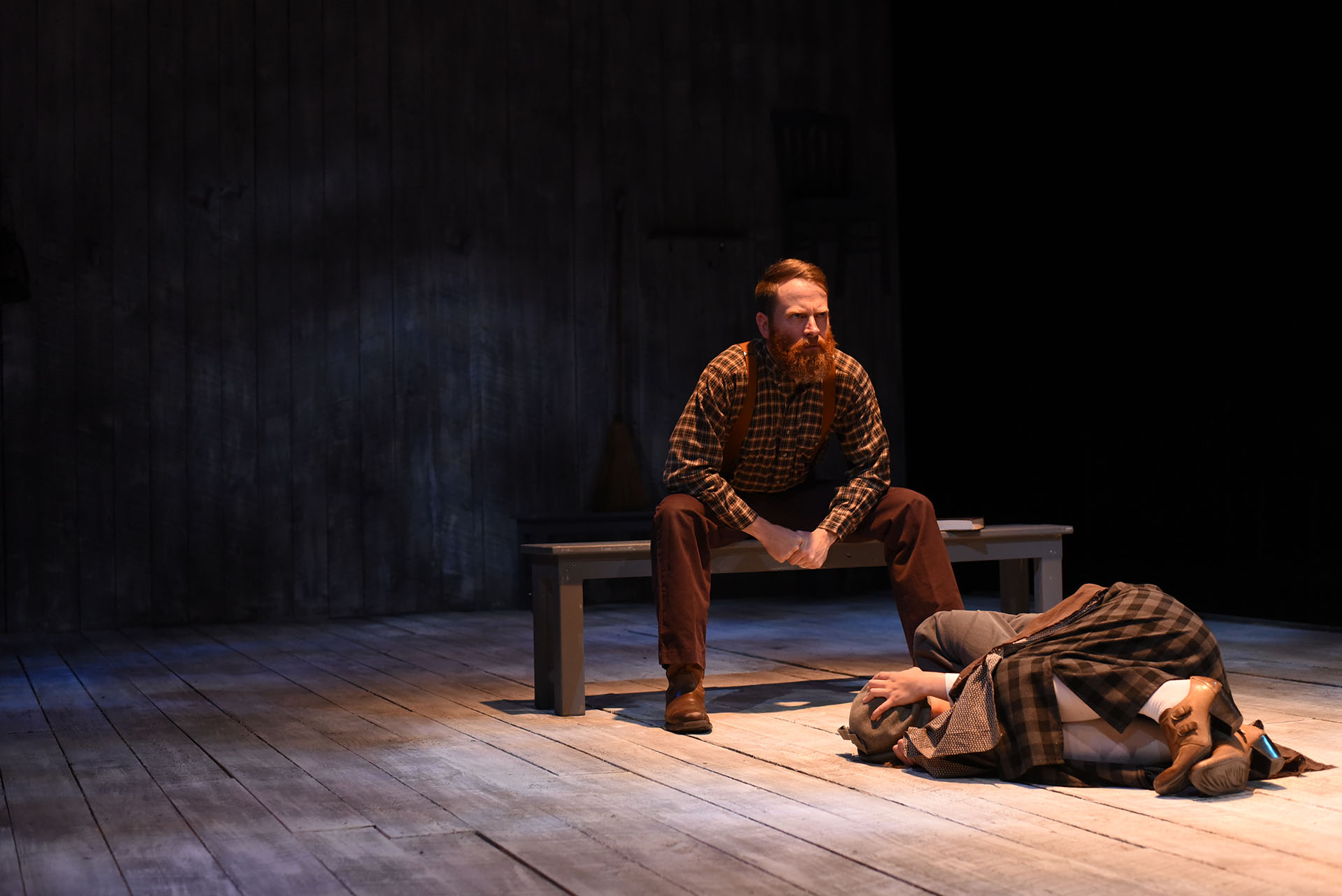 This review was originally published by Carolina Curtain Call on September 27, 2019.  Review by Steve Wong.  Photo by Wallace Krebs.

I don’t know how other theatre companies have produced The Crucible, but The Warehouse Theatre in Greenville is presenting it with some odd creativity, which makes this American classic all the more intense.

Undoubtedly, in-the-know theatre-lovers already know what The Crucible is about — the Salem witch trials in 1692-93. It was a time when any mean teenage girl could act a little crazy and accuse someone in the colonial community of casting a spell on her and that person would be persecuted and possibly either hanged or burned at the stake. (Don’t get your hopes up: There are no hangings or burnings in this play.)

The play was first produced for Broadway in 1953, written by the acclaimed Arthur Miller. It was written in response to McCarthyism (1950-54), another dark time in American history when our government accused citizens of being communists, causing widespread paranoia and ruining innocent lives. Pretty plainly, the play is an allegory between the witch trials and the McCarthy Hearings.

All things considered, it is a safe bet that Miller never intended for his play to include a string of red lights at one of the stage outlining the woods in which teenage girls allegedly danced naked in the moonlight. It probably doesn’t call for having the police authorities and prisoners dress in modern-day uniforms or prison jumpsuits. And, yet, these creative modifications work — they work extremely well at re-telling a story that won a Tony Award for Best Play in 1953.

Despite the strict adherence to the original archaic dialogue, the large cast of characters, and the length of the show, Warehouse is holding its audience’s rapt attention through wonderful acting, creative staging, and just enough touches of modernism to keep even the most naive patrons engaged in the details.

Taking creative liberties with the classics is nothing new for The Warehouse, as The Bard might attest. It is something they are known to do and do well. In some ways, this creative use of staging and costuming makes the play seem relevant to the times in which we now live — a time when a woman can post online #MeToo and cause men of means to request open doors and even a chaperone when meeting with her on mundane business matters.

Using a traverse layout (the rectangle-shaped stage is in the middle of the room with closed ends and audiences on both long sides), the stage is striking even before the show starts. The raised stage has a rough and solid wooden floor. At one end, there is a similar tall and wooden wall, claiming a few period pieces of furniture, such a bed and chairs. At the other end raised even higher is a small-room-sized box outlined with red lights containing artsy bare red trees and a scattering of what might be clothing or public notices. At times, there are male and female choruses behind these ends chanting or singing. Overhead is a stark white and modern-looking grid giving the stage more definition but causing curiosity until its purpose — bright, glaring, harsh white light — is revealed late in the show.

There are four acts to this play, each one adding to the wealth of details that center on the guilt or innocence of those accused of witchcraft. Although dozens of people are accused and/or arrested, the play focuses on the case of farmer John Proctor, played by Jason D. Johnson, trying to prove the innocence of his wife, Elizabeth, played by Jennifer Webb.

The accuser is Abigail Williams, played by Lena Bledsoe, a young woman (more accurately a girl) who has had an affair with John and who trying to be rid of the wife in hopes of having John to herself again. Along the way, a lot of people get hurt.

The level of intensity and complexity that these actors present their characters is off the chart. Johnson is a standout in his performance of man fighting a self-important and fanatical judicial system, ignorance and fear among the common people, and a vengeful ex lover who has tapped into the hysteria of the times. As he confronts an onslaught of accusations from the church, law enforcement, and his neighbors, his every move across the stage has purpose and intent. His every word is ensconced in conviction. He is trapped by guilt, love, and lies, and he has to decide whether to give in — confess under duress — to the authorities or hold true to what is right in his heart, mind, and soul. Appropriately so, Johnson has a full beard for this show, but I cannot help but wonder how seeing his full facial expressions might add to his already engrossing performance.

As an actress, Bledsoe is tasked with being an innocent girl, a harlot, and a schemer. At times, she is subtle, convincing, and conniving; at other times, she fakes hysterics. As there are several young women in the show, it would be easy to lose track of Abigail amid all the period clothing and hair-stylings, but Bledsoe manages to stay clearly identified with a leadership quality that sets her apart from the screaming antics of her tribe of mean girls. Although she is strong throughout the play, she really shines during a court proceeding where all the girls are present in outrageous haute costumes. Her conflicted portrayal as an accusing victim is accentuated by the red lipstick, an almost witchy dress, heels, and purposely underplaying witness with a hidden agenda. She’s complex, good, and really bad.

Webb gives her character Elizabeth an amazing inner strength. As a good colonial wife, she is understated, godly, and truly innocent. She is also a source of strength for her husband John struggling with angst. When in conflict with strong and demanding characters, such as a sniveling minister or power-hungry judge, Webb is excellent at letting her character’s sincere and morally straight attributes steady her in the face of false imprisonment and death.

As with any great play, the actors on stage are supported by a small army of creative professionals behind the scenes. This is especially true for this production. Director Jayce T. Tromsness has taken a masterpiece and evolve it to something truly unique and has honored the original intent of the playwright. Old dramas have a way of being avoided by those unwilling to risk a few hours of time. This drama is a risk worth taking: Tromsness has made The Crucible new again.

Scenic Designer Charlie Calvert is a man of true vision to have created a stage setting as unusual but engaging as this one. Costuming by Margaret Rose Caterisano is beautiful and thoughtful, be it rough dull garments worn by farmers, fanciful dresses worn by mean girls, or prison jumpsuits stenciled with words “prisoner” on the back. Lighting by Maranda DeBusk is noted in this production, especially when there was a need to shine light on the ugly truth. And, sound by Kevin Frazier actually catches your attention during transitional times, when overlapping voices of victims and authorities vie to be heard.

It takes effort to understand and appreciate The Crucible, but The Warehouse Theatre has given us a production that makes the effort truly rewarding. Some may appreciate it for his allegory; others for its artistry. For whatever reason, see it and understand that our American society is constantly on the brink of fanaticism. Only through truth will it prevail.