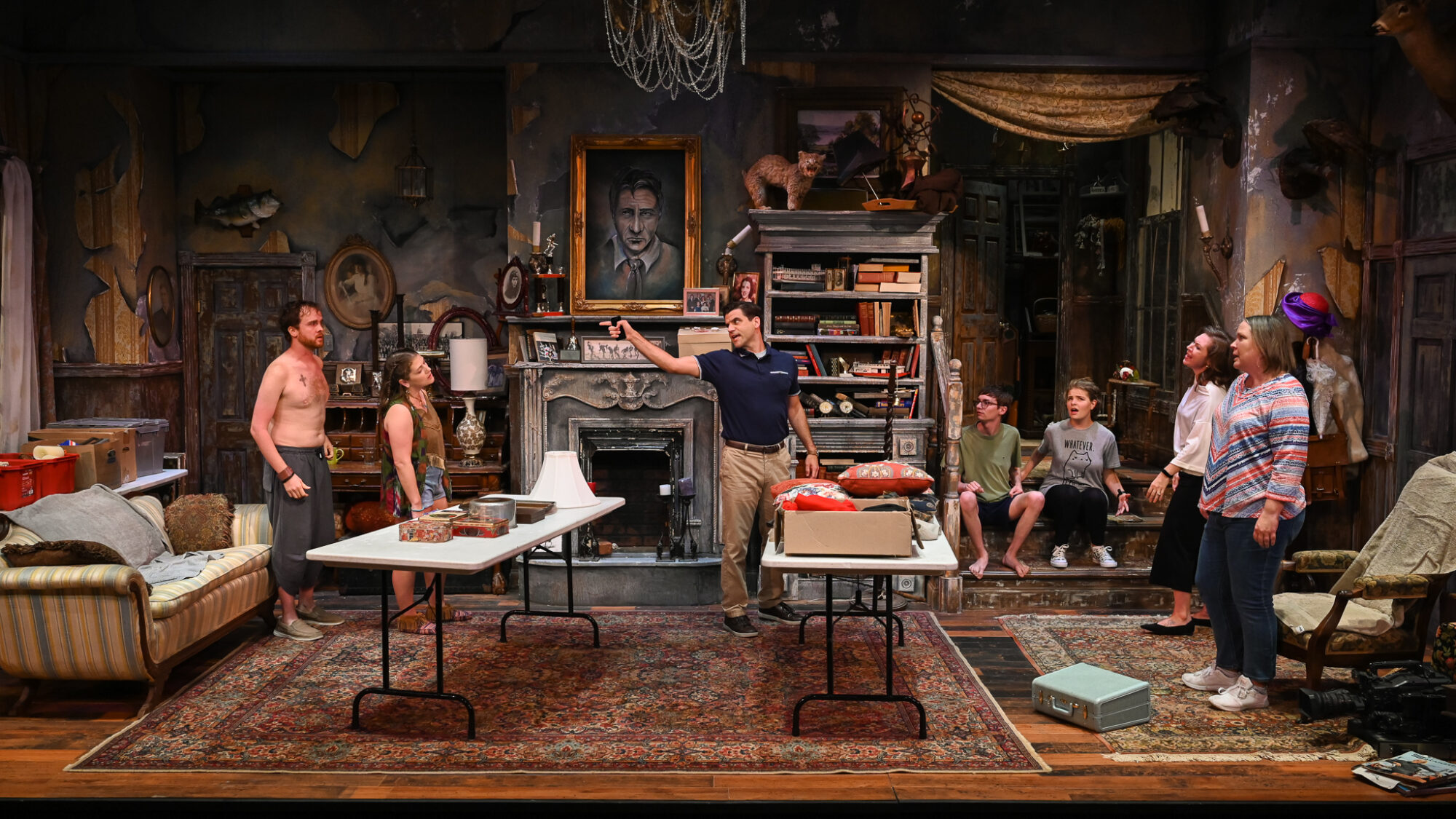 By Jason JohnsonJune 15, 2022No Comments

You can’t go home again. Okay, well, sometimes you literally can. But that doesn’t always make it a good idea.In Branden Jacobs-Jenkins’ APPROPRIATE, now playing at the Warehouse Theatre, the three grown children of the Lafayette family return to their late father’s Arkansas home. Now six months post-funeral, eldest sibling Toni (Kerrie Seymour) is trying to clean up and organize their father’s house in advance of an estate sale. Middle brother Bo (Thomas Azar), in charge of selling the place, is not thrilled by Toni’s apparent lack of progress. Their father seems to have been a hoarder, adding extra layers of mess and trouble to a house that is already falling apart. Further complications arise from the arrival of youngest brother Frank (Christopher Paul Smith), who disappeared from their lives years ago and was even a no-show at the funeral. Accompanied by his flaky girlfriend River (Clare Ruble), Frank has something important to say to his brother and sister – something they might not be ready to hear.

And then there’s the book. Hoo boy, that book. Everyone hopes it’s just another weird relic in a house full of garbage. But it may just prove to be the foundation of a whole new way for the Lafayettes to view themselves.

By turns hilarious and horrifying, APPROPRIATE digs into the stories we tell ourselves – as individuals, as families, and as a society. Director Jay Briggs leads a stellar cast and crew in a beautifully layered and memorable production.

Kerrie Seymour delivers possibly her finest performance as Toni, the woman left to clean up her family’s mess. Like the cicadas, whose incessant buzzing permeates the Arkansas surroundings (big kudos to sound designer Kacie Willis), Seymour gives Toni a bubbling undercurrent of anger and resentment, emotions that have stirred within her for years only to finally crawl out of the darkness. And it’s all couched in an ambling nonchalance that barely masks the character’s true depth of feeling. She makes a great contrast to Thomas Azar’s Bo, who seems to be perpetually on the verge of an explosion. His hands are always making fists, his expressions and feelings right there on his face. Then there’s Christopher Paul Smith as deceptively simple brother Frank – or Franz as he now prefers to be known. Smith brings a slow, deliberate pace to his movements and his speech patterns, making him a perfect lynchpin for this triumvirate of siblings.

Underscoring the actors is a frankly astonishing set by Shannon Robert. Filled with secrets and atmosphere – with help from Shari Tingle’s well-chosen props and Kevin Frazier’s tense lighting – the house becomes another character in the drama. Take the time to study the details strewn throughout the stage. You’ll be highly rewarded.

Director Jay Briggs brings a sure hand to the production, managing to heighten the comedy while never detracting from the creeping sense of horror that seeps into every corner of that marvelous set.

APPROPRIATE is maybe the platonic ideal of a Warehouse show. Funny, dramatic, engaging, and designed for late night discussion, this play is not to be missed.