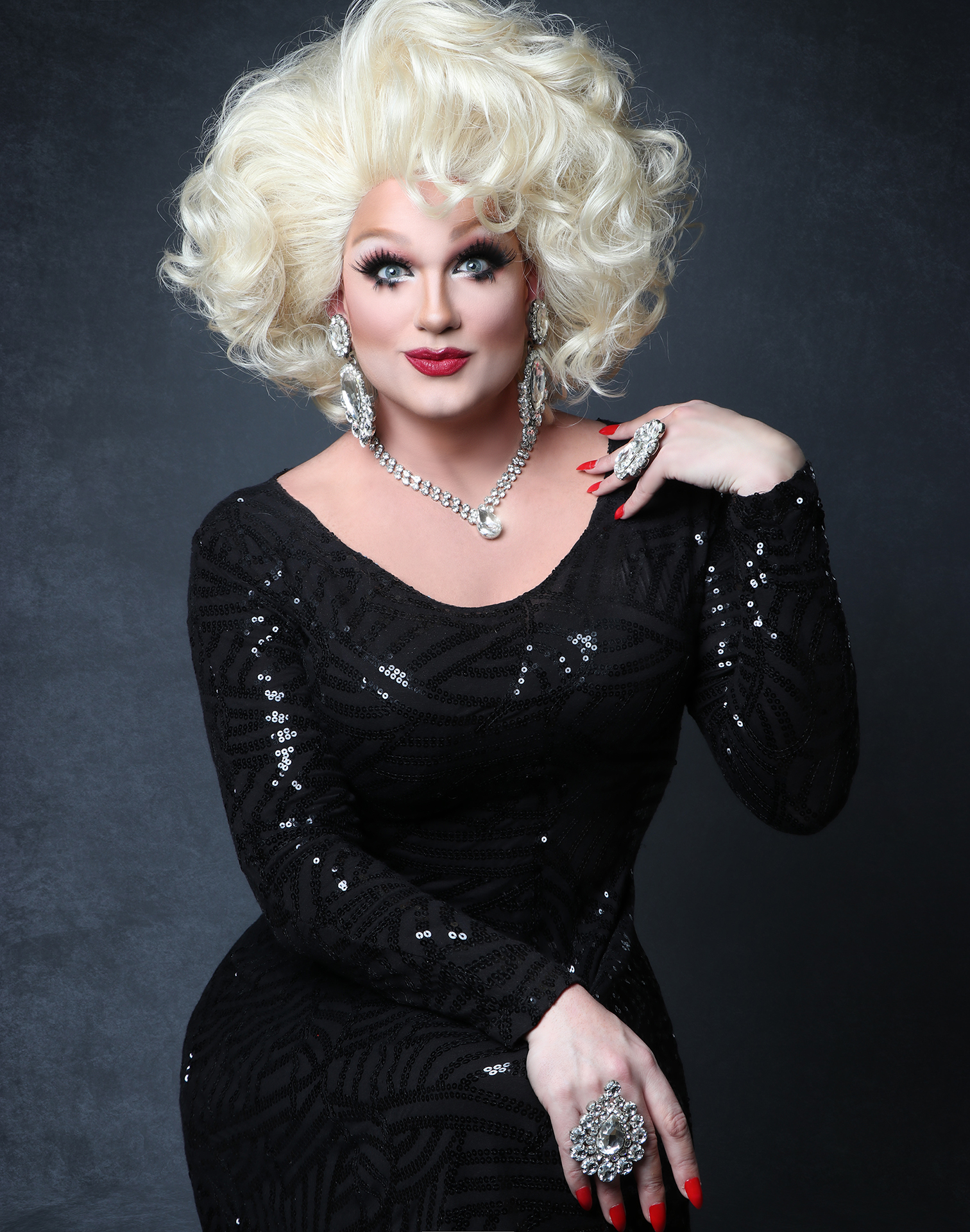 BWW Interview: America’s Got Talent Drag Singer Delighted Tobehere on Starring in HEDWIG AND THE ANGRY INCH at Warehouse Theatre

This interview was originally conducted by Neil Shurley and published by Broadway World on December 18, 2019.

When drag queen Delighted Tobehere stepped onto the stage of AMERICA”S GOT TALENT, it’s safe to say that the judges and audience expected a campy singing performance. But none of them expected what they actually got – a rumblingly authentic cover of bass-voiced country singer Josh Turner’s “Your Man.”

This coming February, Delighted Tobehere will tackle a whole new role as the title character in The Warehouse Theatre’s production of HEDWIG AND THE ANGRY INCH.

“On behalf of myself and director Andrew Scoville (who helmed our immersive BLOODY BLOODY Andrew Jackson) we are…delighted (pardon the pun) to have Delighted Tobehere as our Hedwig,” says Warehouse Artistic Director Mike Sablone. “We opened our casting process up to a nationwide search and we’re thrilled that we found someone with ties to the Upstate.”

Sablone goes on to sing Delighted’s praises. “Delighted brings an incredible sense of comedic timing, is an expert at crowd work from their experience hosting drag brunches (including some at Cafe and Then Some right here in Greenville), can sing like nobody’s business, and brings a deep knowledge of the Upstate to make sure this show feels rooted in our backyard. Together with the previously announced Miranda Barnett we have a formidable twosome commanding the stage backed by a four piece live band.”

Sablone says the show will be “unlike anything you’ve seen. Part rock concert, part drag show, part stand-up, all theatre, HEDWIG will transform The Warehouse space into something completely new, yet strangely familiar. If you’re a fan of ROCKY HORROR, you especially won’t want to miss this!”

We recently had a chance to catch up with the man behind the makeup, Clay Smith, to find out more about Delighted Tobehere and what we can expect from HEDWIG.

First off, congratulations! What are you most anticipating about being involved in this production?

I’ve had the pleasure of creating my own cabaret shows over the past decade or so, where I play the roles of producer, writer, and performer, so I think I’m most excited about working with a team of creators again. The team that The Warehouse Theatre’s Artistic Director Mike Sablone and director Andrew Scoville have corralled have been a joy to work with already. Creative energy like that is contagious and I’m…delighted…to be a part of this team!

I see what you did there. So what’s your previous experience with HEDWIG? Have you seen other productions?

My cousin, Jane, introduced me to the movie about 15 years ago or so with a shocked and firey “you’re a drag queen and don’t know HEDWIG!?” Indeed. Not long after my initial viewing of HEDWIG I was asked to be the makeup artist of a production at The Actor’s Theatre of Charlotte starring Billy Ensley, where I became wholly indoctrinated into being a HedHead. A few years later ATC brought the show back starring Scott Ripley (Alice Ripley’s brother), and that pushed me over the 50 show mark. I did see the Broadway show with both Andrew Rannellsand the creator of this magical creature, John Cameron Mitchell. So, 3 productions, 4 Hedwigs, and now it’s my turn.

What made you want to play this part?

The decision to play this part happened long ago, but the opportunity just presented itself recently. 2019 has been a year of trying things that scare me. This role scares me, but in the same way spicy food makes you want more of it, despite the pain. You crave it. I think that all entertainers, to a certain extent, use their craft to help them understand themselves. Hedwig, in a way, uses her show to work through her own hypotheses of life and identity. I think Ellen says it best, “why pay a therapist to talk about your problems, when you can have an audience pay you to talk about your problems?” So, thanks, and enjoy the show! *wink*

Tell us a little about your upstate connections and general background.

“Picture it, Sicily. 1943.” I was born and raised in Greenville, SC. I graduated from JL Mann High and went to the Fine Arts School for voice. I then hopped down the road to Clemson University to become the first person to sign up to study vocal performance in their new Performing Arts degree, while minoring in theatre. While there I played Hysterium in A FUNNY THING HAPPENED ON THE WAY TO THE FORUM, BJ Gibson in 1940’s RADIO HOUR, and numerous community theatre productions around the upstate. While in college I started performing in drag shows, which swiftly moved from hobby to part time job to full time job. I took the interdisciplinary studies from Clemson to take my newly minted drag career to the next level. I now produce and write shows that travel internationally.

This is (if I’m counting right) your fourth year performing your cabaret show in Puerto Vallarta. What keeps bring you back there?

Puerto Vallarta will turn you into a boomerang. The culture, the food, the weather, and most importantly, the people, make for a perfect storm of a travel destination. I’m a huge fan of being around so many talented entertainers all coexisting in the same town to make a name for themselves, hone their craft, and entertain the masses. Some of my favorite shows that have started there and gone on to tour are DRAG 101 (a total drag transformation show), SHE HAW (a country ho down), and DIVARIETY (a celebrity illusion variety show that I get to perform with my drag sister and wig stylist to the stars, Gigi Monroe.) I’m currently in Puerto Vallarta as we speak for my fourth year performing at Act2PV.

Even though HEDWIG premiered over twenty years ago, I think an argument could be made that it’s more timely than ever. How do the show’s characters and themes resonate for you? How do you think it will play with upstate audiences?

My friend Bob the Drag Queen describes drag as “blurring gender lines through art.” It’s the most succinct and inclusive description I’ve heard to date. Though this show isn’t a drag show, gender identity, gender expression, and art are front and center in the show, just like in society today. The show resonates with me because when I chose to love and accept myself I was able to love and accept others more fully and more openly. It’s a real-world-applicable, tangible, and achievable goal that this show challenges us to take on.

The upstate continues to impress me on how slowly, but increasingly open they are to the LGBTQ community. From a record breaking Upstate Pride SC festival this year in Spartanburg, to celebrating my second anniversary of Delighted’s Drag Brunch and Dinner at Cafe and Then Some in Greenville, for a historically conservative part of the country, those two things alone are mind bogglingly impressive. I am one who can spout out a platitude for just about anything, but two are Clay originals. One being “the educated are rarely intimidated.” A reminder that fear is often prevalent in the dark, and education can shine a light on any topic. The other is “understanding is not a prerequisite for respect,” which, in practice, is as simple as asking someone their name, and then letting them tell you their story, without pretense or judgement. I did a TEDx Talk about how stereotypes, assumptions, fear, and expectations will prevent you from having quality relationships, be they familial, romantic, coworker, or an authentic relationship with yourself. This show jumps in head first on all of those areas in the most fun and thought provoking way possible. Ultimately, I think anyone who loves to laugh, loves to love, and loves a little rock n roll will fall in love with HEDWIG as I did.