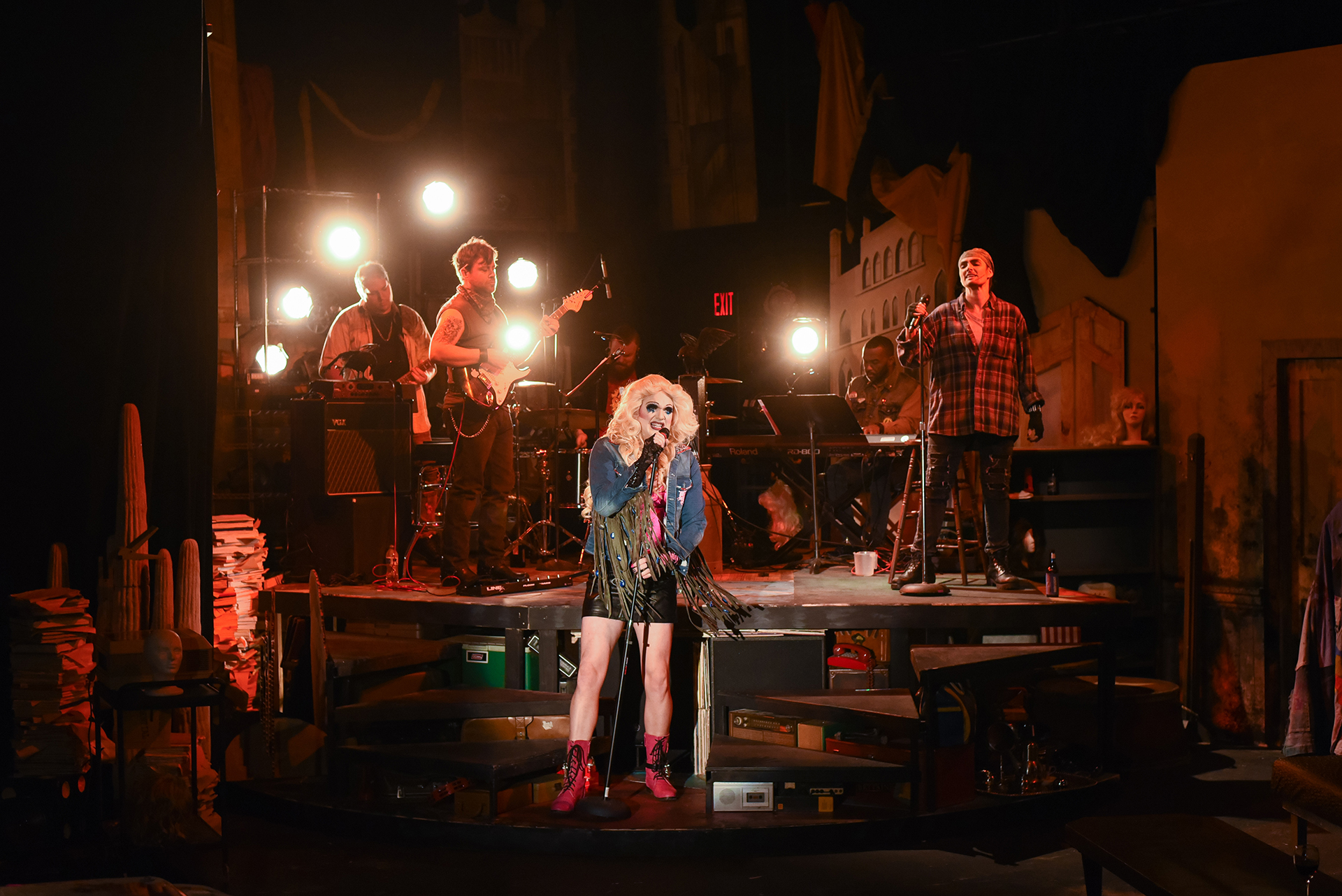 This Broadway World article from Neil Shurley was originally published on July 6th, 2021.

From the triumphant return of HEDWIG AND THE ANGRY INCH to the world premiere of a new drama to the musical joys of THE 25TH ANNUAL PUTNAM COUNTY SPELLING BEE, The Warehouse Theatre’s 2021-22 season promises another year of intense, intimate and unexpected live theatre in upstate S.C.

“When we first selected these shows, our intention was to bring people together with productions that have weight, relevancy, and purpose for both Greenville and the nation,” Warehouse Theatre Producing Artistic Director Mike Sablone told BWW. “And now, in the wake of a global pandemic that has redefined our culture, we feel it’s more important than ever to highlight the messages of connection and community presented in these outstanding productions.”

The season kicks off with the relaunch of HEDWIG & THE ANGRY INCH, which opened at The Warehouse in February 2020 (to at least one rave review) but closed early due to the pandemic.

“Because we had to close HEDWIG early, the set has remained in our space since March of 2020,” Said Sablone. “When I cancelled the final week I told the cast right after the matinee [that] I would do everything I could to see that as many people as possible could see the show whenever we could reopen. Did I think it would be a year and a half? Oh god no. But, that being said, our conceit that there was a flood in the basement and Hedwig asked to perform on old sets works even better coming out of a pandemic. When it looked like we would be able to come back, the first thing I did was reach out to the cast and director to see if they were interested in coming back and I got resounding, enthusiastic, and teary YES’s from all.”

Another show returning to the schedule is Branden Jacobs-Jenkins’ APPROPRIATE, which was already in the late stages of production design when the shutdown occurred. Sablone was thrilled when the actors they’d cast for last year’s planned production agreed to return in 2022. “It’s a really fantastic cast so I was excited they were committed to telling this story.”

Asked if he’s anticipating any special audience protocols for the new season, Sablone emphasized the fact that The Warehouse Theatre is “a union house” and so are working with Actor’s Equity Association on what the safety protocols are going to be when they open their doors in September. “The good news is, due to the generosity of Greenville Women Giving, we have an HVAC system that is only two years old,” Sablone added. “We also received County Cares funding to install a Needlepoint Bi-Polar Ionization system, so in terms of airflow our building is going to be very safe. There is a chance we’ll have limited seating, require patrons to wear masks, and limit concessions in a continued effort to protect our staff, artists, and patrons. As it gets closer to the start of the season we will publish our full safety plan, but of course the more vaccinated people in our area the easier it will be to come back with the fullest houses we can.”

HEDWIG AND THE ANGRY INCH

Meet “internationally ignored song stylist” Hedwig, a fourth-wall smashing East German rock n’ roll goddess who also happens to be the victim of a botched sex-change operation. Performing in the form of a concert gig/stand-up comedy routine backed by the hard-rocking band “The Angry Inch,” Hedwig describes her life’s search for “The Origin of Love” and her other half. A musical for anyone who feels that life gave them an inch when they deserved a mile.

SABLONE: “Hedwig has remained in the space since we had to cut her run short last year. She’s been the main occupant of 37 Augusta for the last 15 months and I’m excited to see her and our triumphant return to performing in front of live audiences this fall!”

Based on the novel by Jane Austen

In a theatrical retelling of Jane Austen’s classic romantic comedy, sisters Elinor and Marianne find themselves scrambling after their father’s sudden passing leaves them nearly penniless and socially vulnerable. While navigating a gossip-filled society obsessed with reputation, the Dashwood sisters must decide for themselves which to follow-their heads or their hearts.

SABLONE: “There is nothing I love more than a big comedy that gets to show off how talented our local actors are by having them switch characters mid-scene. PRIDE AND PREJUDICEwas a huge hit for us and I’m so glad to bring another of Kate’s uproariously smart and contemporary retellings of Jane Austen to Greenville!”

Celebrated children’s novelist Nora Tennant has garnered significant fame from her book trilogy The Lotus Paradox. And now she’s contemplating a fourth book, despite the strain the series placed on her relationship with her two kids. And during a gathering on the eve of her birthday, matters are complicated even further when a young, obsessed super-fan shows up unannounced.

SABLONE: “Greenville audiences got a chance to see playwright Dorothy Fortenberry’s work with director Jay Briggs in “Germs” from LONG STORY SHORT (and might have already seen her work on Hulu’s “Handmaid’s Tale”) and I cannot wait to see what they bring to this world premiere. It’s another example of how we are creating top notch productions with nationally known artists from the ground up right here in the Upstate.”

During a weekend of backyard renovations at their new home, Pablo and his wife Tania discover a discrepancy with their property line-which apparently cuts through the prized garden of their neighbors, Frank and Virginia. What begins as a civil disagreement turns into an all-out border war of hilarious proportions.

SABLONE: “This hilarious comedy is probably playing out all over Greenville, as gentrification continues to expand here. A contemporary farce where the stakes keep getting higher and higher, I’m thrilled to finally bring this incredibly popular show to our Warehouse audience.”

A pack of teenage girls gear up for their next indoor soccer match. Tensions are high, game faces are on, and inner-team battles are raging wild during this week’s warm up, which offers a rare glimpse into the tumultuous and complex world of female adolescence.

SABLONE: “Highly theatrical, tailor made for our space, this is another popular play that has been produced everywhere across the country to enormous acclaim. It’s especially poignant given the events of the last year and a half as well, so this is a show that will be even more powerful and engaging now.”

The three estranged children of the Lafayette clan descend upon their family’s crumbling Arkansas homestead to settle the accounts of their recently deceased patriarch. While sorting through a lifetime of hoarded mementos and junk, they collide over clutter, debt, and contentious family history. But after a disturbing discovery emerges from their father’s possessions, the reunion takes a turn for the explosive.

SABLONE: “Having to cancel this show last May was devastating. When I came to Greenville it was the first show I knew we had to produce, and so I’m proud to finally bring Branden Jacobs-Jenkins’ work to Greenville. An astonishing cast and incredible designers combined with one of the best plays in recent years makes this a must see.”

Music and Lyrics by William Finn

It’s the championship of a lifetime! Join us in the unpredictable, highly competitive, and (surprisingly) musical world of spelling bee championships as we watch a group of six kids with big personalities spell it out for the title of Putnam County Spelling Bee Champion (with some audience participation, of course).

SABLONE: “Rarely has a musical made me laugh this hard. It’s got humor, heart, and theatricality, and with the local talent we have here this show is going to be an incredible experience. So much so we moved it to the summer for it to run longer to make sure everyone can see it more than once!”

Season subscriptions are on sale now.