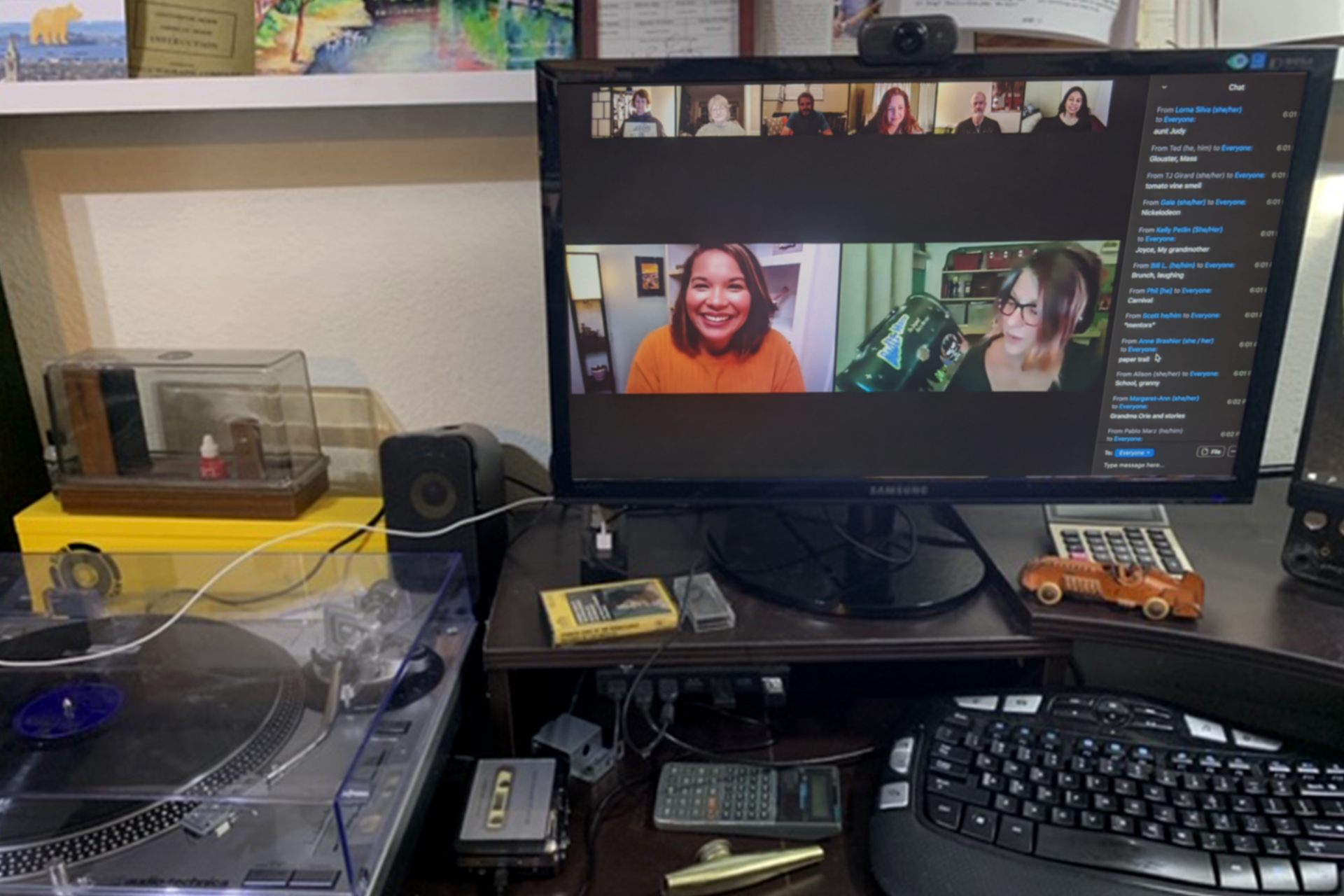 This Juliet Bennett Rylah review was originally published by We Like L.A. on November 5th, 2020.

Mister and Mischief’s Objectivity: From Clutter to Clarity with Mary Del Campo is a different kind of Zoom theater experience. It’s a touching, funny, interactive show disguised as a self-help webinar on decluttering. The show examines the value we place in our possessions, starting with just one of your own.

In Objectivity, Mary Del Campo (Jessica Eckenrod Cherry) is a lifestyle guru who teaches her students how to find happiness by getting rid of objects they don’t need. The obvious real-life comparison here is organization expert Marie Kondo, whose most talked-about practice is to declutter by determining if objects “spark joy.”

“Many people think we are doing a parody of Marie Kondo and the various Marie Kondos of the world, but that implies that we are making fun of her, which we are not! We love her!” Andy Crocker, who co-founded Los Angeles immersive theater company Mister and Mischief with her husband, Jeff Crocker, told We Like.

Crocker sees value in examining our relationship to our things and the “emotional exploration” that might bring, but notes that all self-help practices are ultimately aspirational.

“And that can be tricky when media empires are being built on people’s hopes for a more perfect life. Especially when we, as a culture, are going through a large-scale mental health crisis,” Crocker said, before chiding herself for getting “too serious.”

In Objectivity, the fictional Del Campo asks her attendees to choose one item in their home they haven’t used since March. The obvious significance here is that March is when everything changed—when we stopped leaving our homes unless it was for jobs or activities considered “essential.”

I chose my wristwatch. Its battery stopped weeks ago, but I haven’t bothered to replace it. Time hasn’t really had much meaning since this whole at-home-all-the-time business began. Other guests brought unworn shoes, cosmetics, knick-knacks, and art supplies. Some objects were still in their original packaging, never used.

Mary asked us questions about our objects and the value they held in our lives. At one point, she asked something to the effect of, “Are you holding onto your object in the hopes that your lifestyle will one day call for it?” Yes! I want a reason to need to know what time it is! I thought of all the times I’d worn it while traveling to keep track of how close I must be to my destination. I miss traveling. I miss trains. These days, it might as well always be 4:18, as my watch suggests.

It’s hard to talk about what happens next because it’s endlessly more delightful if you don’t know what’s coming. So, I’ll just say that what ensues is a hilarious battle between minimalism and nostalgia, but there’s no clear winner. As Crocker says, “Decluttering allows us to think clearly, and mementos bring us comfort. Both are incredibly important as we try to get through tough times.”

In the end, it’s up to you to decide what your object means and if it’s worth keeping. Crocker said many audience members have emailed them to share their decisions.

“Some have mailed their objects to happier homes and in the process reconnected with old friends. Some have chucked their items straight into the trash. There is a woman who told us that though she is going to keep her object, and that it reminds her of a lost loved one,  it no longer makes her sad to see it. That’s the crazy twist. We set out to make a fake seminar… but I think we actually might be helping people!” Crocker said.

When Mister and Mischief began developing Objectivity, it wasn’t meant to be a Zoom show. But what they lost in having real-life show, they gained in reaching audience members around the world, especially through their partnership with The Warehouse Theater in Greenville, South Carolina. Each participant now joins with their own objects, streaming live from their homes and peering into one another’s.

“It makes everyone’s environment and experiences deeply personal. That could have never happened if we had built out a space to do the show. And because we were so early in development when we made the shift online, we were able to really tailor the piece online. We ended up creating a piece that felt just like a webinar because it was one. We weren’t interested in pretending Zoom was anything other than what it is. We ended up making site-specific theatre, but the site is Zoom,” Crocker said.

People keep telling me they’re “Zoomed out,” but if there’s one thing I’ve learned as someone who’s participated in and reviewed several online shows since March, it’s that there are things that work and things that don’t. I like a show that clocks in at an hour or shorter, requires me to do things other than just stare at it, uses the platform’s tools at least a few times (breakout sessions, chat, etc.), and interacts without being too demanding. It also does not hurt if it’s funny, which Objectivity nails.

I ended up keeping my object, but sometimes I wear it, even though it doesn’t correctly tell time.