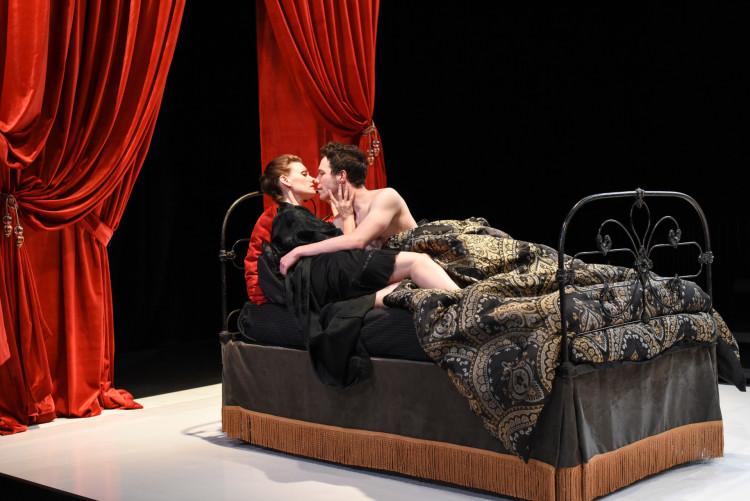 Based on Choderlos de Laclos’ scandalous 1782 novel, this splendid adaptation by Christopher Hampton is the basis of the outstanding film version “Dangerous Liaisons” starring Glenn Close, John Malkovich and Michelle Pfeiffer.  The novel also spawned the over-shadowed period drama “Valmont” with Annette Bening and Colin Firth and the contemporized “Cruel Intentions” featuring Reese Witherspoon, among others.

“Les Liaisons Dangereuses” concerns matters of the heart and boudoir and the intriguing love-hate relationship between aristocratic amorous rivals the Marquise de Merteuil (Miranda Barnett) and the Vicomte de Valmont (Paul Savas, The Warehouse’s Executive and Artistic Director in a rare outing as leading man).

Furious about being spurned by a provincial magistrate in favor of a young virgin fresh out of a convent (Cécile de Volanges played by Giulia Marie Dalbec), Merteuil enlists Valmont in her quest for revenge.  She offers herself (and Cecile) to Valmont in a wager if he provides written proof that he has conquered his latest sexual target, the virtuous and married Madame de Tourvel (Debra Capps in her first role on this stage since last year’s A Streetcar Named Desire).

Though set to marry the wealthier, much older judge, Cecile has fallen for her handsome, but poor, music teacher Chevalier Danceny, a starry-eyed Liam MacDougall, who recently led The Warehouse’s Theatre’s touring production of “Hamlet.”

Through manipulation, deceit and seduction, Merteuil and Valmont play a dangerous game of human chess as they strategically maneuver the other disposable characters around like human pawns and use sex as their weapon of mass destruction.

Barnett, fresh from her comic turn in “Vanya and Sonia and Masha and Spike,” is diabolically delectable in a robust part that easily ranks among the echelons of coveted juicy roles such as Lady Macbeth or Blanche DuBois. She brims with confidence, has flawless articulate delivery and captivatingly commands our attention, and that of her rival when she beckons him in a come hither move from across the stage to kiss her hand.

And when she says “women are obliged to be more skillful than me,” we are reminded of that glass ceiling that extends beyond the bedroom and that infamous quote, “Whatever women do they must do twice as well as men to be thought half as good?” And luckily, this is not difficult for Merteuil, or Ms. Barnett.