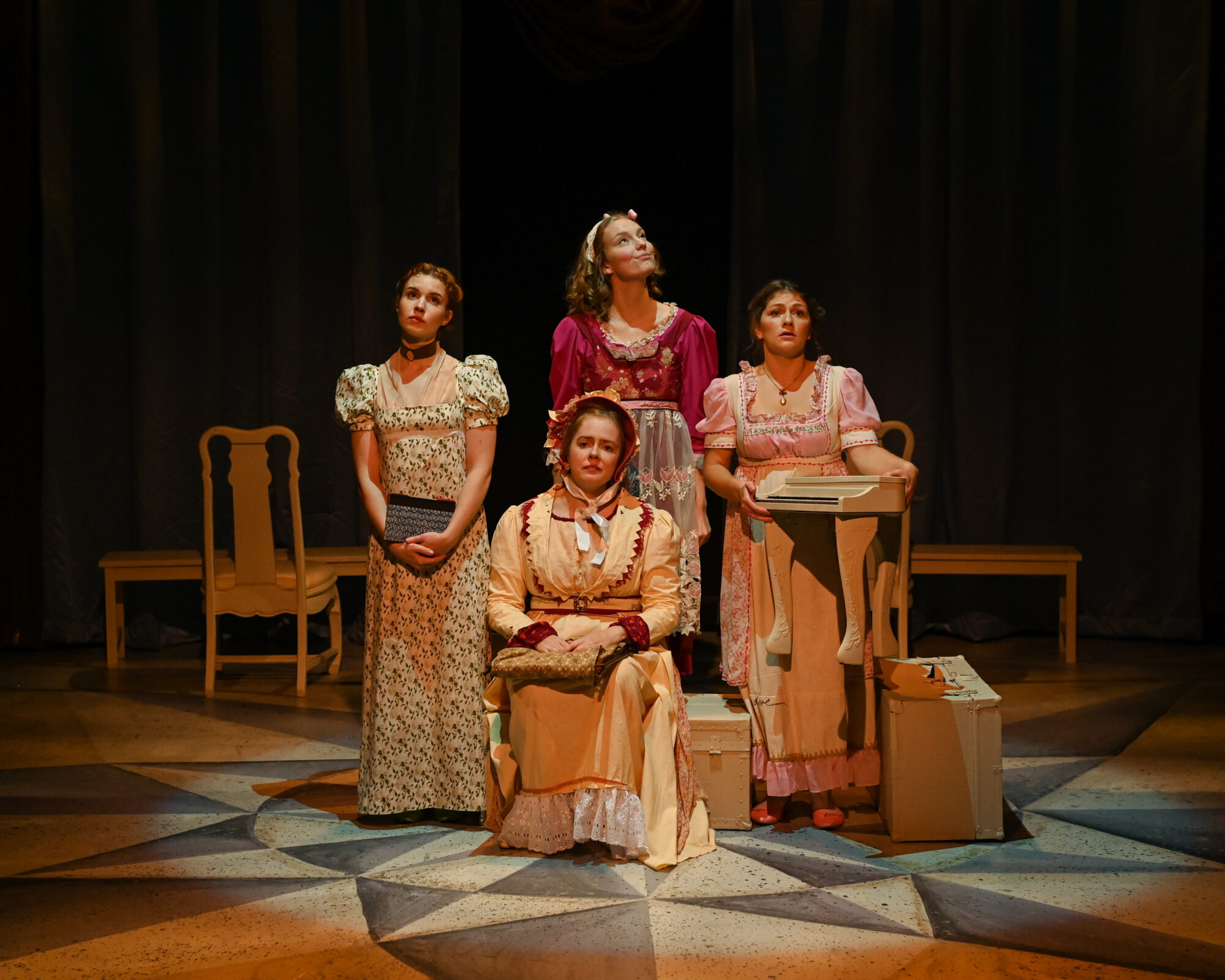 By Jason JohnsonDecember 8, 2021No Comments

This The Paladin article by Macy Petty was originally published on December 7th, 2021.

Dearest reader, did you know that Shakespeare writes in a rhythm that exactly matches the beats of the human heart? Apparently, so does Jane Austen — this is just one of the many witty and heartwarming lessons that I took away from the Warehouse Theatre’s production of Kate Hamill’s Sense and Sensibility. Based on Austen’s 1811 novel of the same name, this stage adaptation opened on Friday, Nov. 19 and will run until Dec. 19. Beyond featuring Furman students, professors, and alumni among the creative team, the show’s beautiful sets and costuming, innovative storytelling, and masterful portrayals of Austen’s legendary characters truly bring a fresh light to this well-loved story, making it a must- see for both theater supporters and the general Furman community.

The plot of Sense and Sensibility is rooted in its time, something it seems director Kerrie Seymour used to her comedic advantage throughout the play. The drama centers around the Dashwood family – sisters Elinor, Marianne, and Margaret and their mother – who have had their world turned upside down when patriarch Mr. Dashwood suddenly dies. All but forced out of their own home by their insensitive older brother Mr. John Dashwood and his cruel wife Fanny, the family is almost banished when Elinor catches the eye of Fanny’s visiting brother Edward Ferrars. The story then follows the family to the countryside, where Edward and Elinor grapple with separation and Marianne begins a relationship with a man named John Willoughby at the slight of her older neighbor Colonel Brandon. Reaching a climax when both sisters find that these men are not all that they appear to be, the audience sees them navigate  societal pressures and their own opposing natures to discover important truths about themselves and each other.

This story has been among my favorites for many years. When I first saw the 1995 film adaptation with Kate Winslet and Emma Thompson, I was enchanted by its poetry and romance. I expected to find a similar drama fraught with both charm and melancholy in the play. Instead, I was pleasantly surprised by the many comedic devices in this adaptation. In many ways, it was able to poke fun at the conventions of Austen’s works while still using these instances to advance the plot. My friend and fellow English major Mary Shelley Reid, who accompanied me to the show, observed that many of the staging devices brought comedic relief to moments that would have been otherwise “fraught with tension.” For instance, carriage rides consisted of the characters sitting together center stage bouncing and careering as if riding in a coach, outdoor strolls were portrayed by hopping across green carpet rolled onto the stage, and lines like the above sentiments on Shakespeare were delivered in such a way that noted and celebrated their old-fashioned charm.

We were especially blown away by the costumes. Designed by Margaret Rose Casterisano — costume designer and costume shop director of Furman’s Theatre Arts Department — and constructed by a team of Furman students in collaboration with Casterisano, the clothes not only captured the period but also offered insights into each character, as words stitched into them  in different places reflected each’s defining traits. For instance, Elinor’s dress declared her “sensible,” while Marianne’s called her “sensitive” and “sassy.” Mary Shelley found this to be an interesting way to keep track for the different characters, as Austen’s figures are often easy to mix up.

The play also double and triple casted several actors as different characters to further elevate the uniqueness of this Austen rendition. For instance, Claire Richardson played both Willoughby and Lucy Steele, the rival with Elinor for Edward’s affections. This not only offered moments of hilarity but also conveyed parallels between these characters that I had never considered before. The funniest of these came from Matt Reece’s portrayals of John Dashwood and the Dashwood’s cousin Sir John Middleton, as it highlighted similar qualities of pompousness and foolishness in both men. These two actors, along with the rest of the cast except Clare Ruble (Marianne) and Brittany Pirozzoli (Elinor), also tripled as the Gossips, a group of the Dashwood’s neighbors who came on stage periodically to offer up what vile rumors the community was spreading about them. Complete with white cloaks covered in phrases like “omg” and “smh,” they opened the play by relating the Dashwood’s unfortunate circumstances and proceedingly framed each of the plot’s twists with social commentary. Mary Shelley noted that the serious implications of this device were clear even through its humor, as she called the Gossips “an anachronistic embodiment of the fears women had in this culture and they ways in which rumors could ruin them.”

Cast members each brought engaging and refreshing portrayals to these familiar characters. Prizzoli’s and Ruble played beautifully off each other as Elinor and Marianne, bringing out of the weaknesses and strengths of both characters and conveying their individual growth throughout the play. Prizzoli captured Elinor’s grace and reservedness, which made for an especially touching moment when she finally gave into her emotions. Guillermo Jemmott Jr. was delightful and sincere as Edward, charming and maddening the audience in his portrayal of the character’s shyness, which was only enhanced further by his pompousness as Edward’s brother Robert. Ruble, a Furman Theatre alum, showed us the highs and lows of Marianne’s unwavering romanticism, making us empathize with both her joy and her despair. Likewise, Richardson brought duality and complexity to both of her characters; her Lucy Steele was equal parts silly and vapid and paired well with the hilarious naiveté of Anne Steele, played by Aaron Ballard. Richardson matched Willoughby’s prevailing falsehood with moments of startling sincerity and, without giving away too much of the plot, I must say that watching Richardson was the only time I ever felt truly sorry for Willoughby.

Other Furman connections among the creative team were the lightening and sound designer Kevin Frazier, a former faculty member, and Kaitlin Noble, a current Furman student who did scenic stitching for the show. Their work was instrumental in bringing the story to life with the beautiful ambiance on stage. The theatre’s artistic director, Mike Sablone, expressed his gratitude for the alumni and students who were involved in the show. He also commented that this production places a “contemporary lens” on Austen’s work, something I wholeheartedly agree with.

So while many consider Sense and Sensibility  purely a serious and dramatic story, Sablone stated that the comedy in this adaptation “activates the warmth and humor of the source material without losing the stakes” and gives the play a new life. He finds that bringing hilarious awareness to the play’s Austenian conventions makes the story more relatable for modern audiences, and perfect “love letter” to performers and theater-frequenters alike. I can extend his statement in saying that this production will also be a love letter to anyone who is admirer of the period drama, or who is simply in need of engaging and creative entertainment!