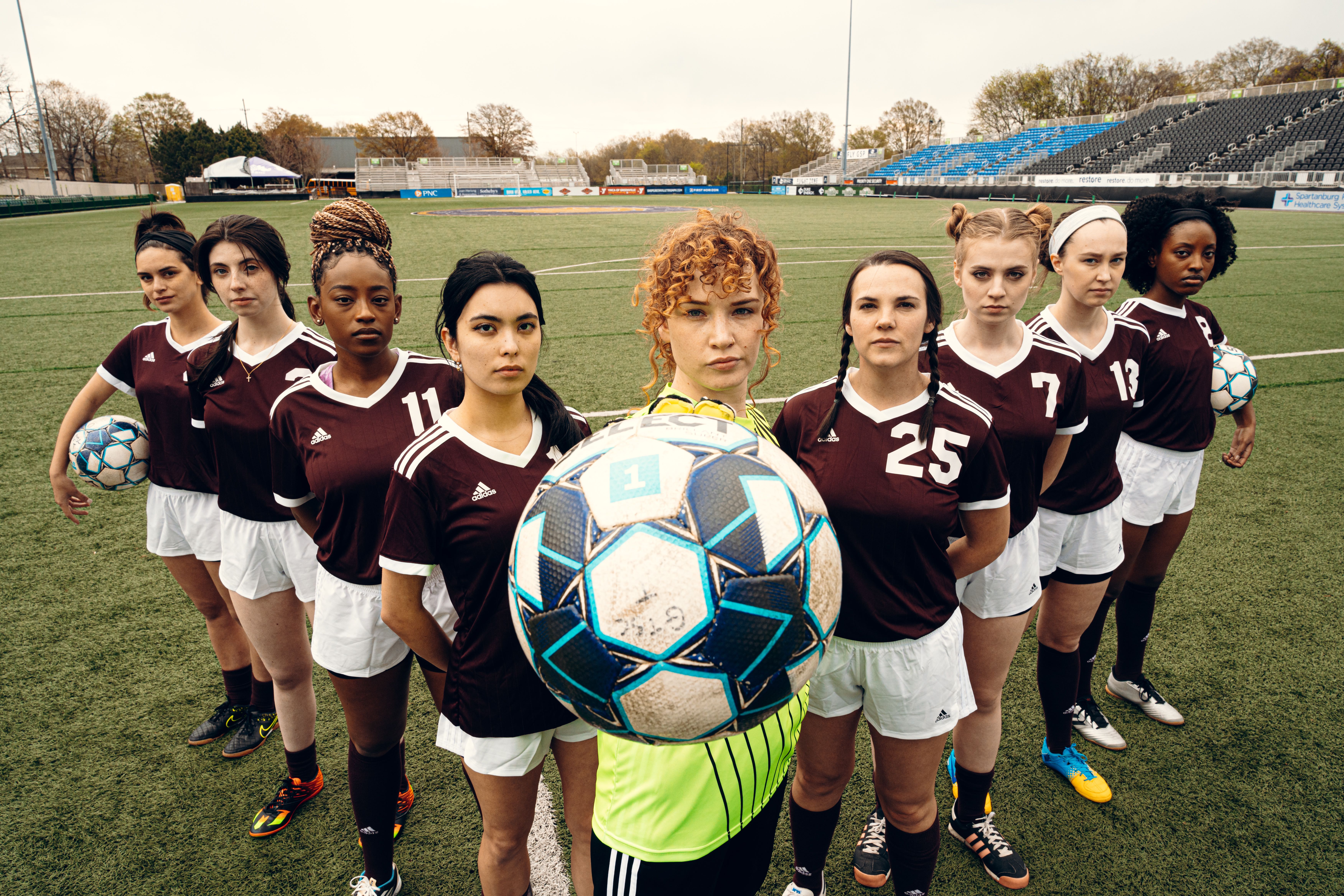 BWW Interview: Jo Garcia-Reger of THE WOLVES at Warehouse Theatre

By Jason JohnsonApril 20, 2022No Comments

This Broadway World article by Neil Shurley was originally published on April 19th, 2022.  Photo:  Will Crooks.

As a suburban girls soccer team warms up, the physical and mental games begin.

Sarah DeLappe’s Pulitzer Prize finalist THE WOLVES opens April 22 at Greenville’s Warehouse Theatre. In the play, stories, opinions, and jokes fly as the team members navigate the struggles of maintaining individuality while still fitting in with the group.

BWW recently had the opportunity to ask newcomer Jo Garcia-Reger to tell us more about the show and her real-life soccer experience – including the broken back that ended her career.

BWW: First off, please tell us a little about yourself.

I was born in Louisville, KY and grew up in southern Indiana. I went to high school at Providence High School, and studied theatre, music, and dance at Indiana State University. Right now I kind of travel around the country acting with whatever company will house and pay me, and so far that has taken me all over Texas, to Cincinnati, San Diego, this summer I’ll be in Yellowstone, and of course now I am in Greenville, which might be my favorite so far! I like to read novels and I write music in my spare time. I also have the most amazing family on God’s green earth, and I am willing to fight anyone on that.

Now tell us a little about the show and your character.

The show, as the playwright and our amazing director, Anne, like to put it, is kind of like a war movie where you see teenage girls preparing for battle rather than men, and of course the ‘battle’ is the soccer field, but also the lifelong war of womanhood. It’s beautifully told and the script has been an actors’ goldmine because of the amount of depth to each relationship and to each girl’s identity. My character is the new girl who travels a lot with her mom, and is actually really good at soccer, which is a spoiler because you don’t find that out until week three. The girls are really mean to her at first because she’s an outsider trying to join their pack. I’ve definitely felt that way before, and it’s kind of interesting that I am playing this character while being the only non local actor in the cast. However, everyone here is a lot nicer to me than the team is to #46!

What was your previous experience with soccer?

I played soccer for 14 years. I played in high school, and on my travel teams (Kentucky Fire, previously Mockingbird), and most notably I played for the Indiana Olympic development program and the Kentucky Olympic development program. I experienced a bad tackle my freshman year of high school which ultimately lead to a fracture in my spine, which ended up being the reason I chose not to continue playing in college. However, I am very happy with how my life turned out, since I chose to major in theatre/music/dance in college and am still doing that to this day!

How does that experience resonate with your character? Is this role personally cathartic for you?

This experience resonates with my character because we both have this kind of hidden talent that we don’t have much of a chance to use. For me, it’s because I don’t really get to play a lot of soccer, if any, in the theatre world. For 46, it’s because she’s only ever on the bench. This role has been a dream of mine since I first heard about the show, and even more so after I saw it at Actors Theatre of Louisville. It’s like the perfect combination of what I would consider to be two of the greatest loves of my life, soccer and theatre.

This team has been amazing. It’s hard to really put words to what it’s like as a woman to work in a room with all female identifying people. It feels like a real wolf pack in so many ways. I was also super impressed as the soccer captain at how quickly the girls picked up dribbling and passing and how eager they were to learn some cool new moves! They’ve really taken the sport seriously and have also been so welcoming to me as the only non-greenvillian(?) greenviller(?) green goblin(?) on the team! And Anne, wow, I don’t really have words for what it’s been like to work with a director like her. She makes every single person in the room feel like they are the most important person there, and makes sure that everyone in the room knows that they deserve to be there, and that their voices will be heard.

What do you hope audiences will take away from this play?

I hope the audience takes away a better understanding of the pressures put on teenage girls/female identifying teens, and that they’ll leave with more of an idea of the strength it takes to make the transition into womanhood. And for all female identifying audience members or audience members that had to go through that transition to womanhood, I hope they feel like their stories are being represented well, I hope that they feel seen, loved, and heard. Like all good theatre should be, I hope it’s a good exercise in empathy for all audience members.

What’s next for you?

Where I’ll be next is Jackson Hole, Wyoming at the Jackson Hole Playhouse playing Sarah in PAINT YOUR WAGON!